Ales Brezina - from Martinu to Menzel to Milada Horakova

Today's guest for One on One is Ales Brezina, the head of the Bohuslav Martinu Institute in Prague. Mr. Brezina has spent the last twelve years compiling, annotating and publicizing the work of Martinu - perhaps the greatest Czech composer of the 20th century. But that's not all he's been up to. Mr. Brezina is a composer in his own right, providing the soundtrack for films such as 'Musime si pomahat' (or 'Divided We Fall') by Jan Hrebejk, and Jiri Menzel's 'Obsluhoval jsem anglickeho krale' ('I served the King of England'). As if that wasn't enough, Ales Brezina is just putting the finishing touches to his first opera, called 'Zitra se bude...' and based upon the show trial of Milada Horakova, sentenced to death by the Czechoslovak Communist government in 1950. When I caught up with Ales Brezina last week, I started by asking him whether his close work with Martinu's music had had any effect upon his own composition:

"I would be happy to think so, but I have to admit that I myself only started to compose music seriously around 12 or 13 years ago. I was asked by several of my friends to write music for their movies, and by chance it happened that my friends became quite successful film directors, and so step by step, I became more and more involved in composing music. And then several people started to ask me 'what sort of classical music do you write, for concerts and so on?' It's all happened just by chance. I started working in this institute not as a composer, but as a musicologist. I would be happy to say that I have learnt something from Martinu, but I think the only thing I have learned from Martinu is very general - that you have to work every day."

So you are working with Martinu every day, do you not get a bit sick of him sometimes, or does he always surprise you?

"Martinu is an ocean he wrote so much; dozens and dozens of works. Even now, after some 12 years of directing this institute, I am still discovering pieces I have never heard before - small songs etc. And you even discover pieces that have been lost in Europe, which were lost during Martinu's escape from Nazi-occupied France. I am surprised almost every day." 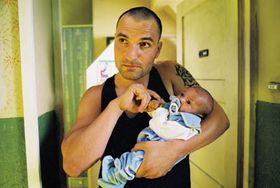 'Up and Down' But back to your own composing, you referred earlier to some of the directors that you started to work with as 'a friend'. A very famous and successful friend of yours is Jan Hrebejk. I was wondering if you could tell me about the relationship that you have with him when he is directing films like 'Musime si pomahat' ('Divided We Fall') and 'Horem padem' ('Up and Down'), and you are writing the soundtracks for such films?

"At the beginning, we became friends just because we liked the same literature and the same music. And we just loved to meet each other. It was back in 1985 when we met in Prague. At that time, he was not accepted by the film academy to study there, and so he had a year off. And I would say we spent almost every day together. He lived in my flat, because I had a very nice flat on Karlova street, which is right in the middle of Prague, and he lived way out in Reporyje, which is quite a way out of Prague. We went to lots of concerts together, and went to the theatre together and so on."

'The Buttoners' "At that time, he didn't think that he would be a film director - he thought he would write scripts for films, and at that time I would never have seen myself as being a composer. But then he was accepted at the film academy, and he started to make short films for his studies, and he was in dire need of some music. I was the only professional musician he knew personally, and so he asked me. I recorded some pieces for him on my violin."

"And then other people from his class, like Petr Zelenka, came and asked me to compose some music for their films. So I did some arrangements for Petr Zelenka's 'Visaci zamek' and for his 'Mnaga happy-end'. And then Petr asked me to write the music for his first full-length film, which was called 'Knoflikari' or 'The Buttoners'."

As someone who now has a lot of experience writing soundtracks, what role do you think a soundtrack should play in a film?

"But if you are going to have music in your film, it is much better not to do what other elements of the film are doing, not to repeat what you see, not to be a sort of supporter of what is obvious - but to go against the grain. And that is the case in one famous scene in 'Musime si pomahat', ('Divided We Fall'), where you can see the crowds lynching young Germans in the streets of a small town. And I wrote for that some sort of happy Czech brass music. The musicians didn't know for what scene it was and so they played it with gusto and gave it their all."

"And suddenly one of them saw on the screen what was going on. They saw it was a very violent screen and became really scared by what they saw. After they saw that, they recorded it in a completely different way. Of course, we used the first version, because we wanted exactly this funny, carefree sort of atmosphere."

"It was just the same with 'Obsluhoval jsem anglickeho krale' ('I Served the King of England'). You should never - I am convinced of this - you should never do the work of someone else. You should do your own work. And the music should be an addition to the film."

To change the subject slightly, can you tell me a bit about the thing you are currently working on - this opera about the trial of Milada Horakova called 'Zitra se bude'?

"So the trial for me was the main subject of the opera. I thought it would be good to bring out the theatrical aspect of the trial - because they prepared it as you would prepare a play in the theatre. Someone wrote the words, then you had a director, and then there were the actors who had to learn the lines by heart. And then there were the rehearsals, and then the opening night. And that was just how it was with this trial."

"It was interesting to me to look at how a society which some 12 years previously - back in 1938, 1939 - had been for people like Karl Popper the embodiment of highly-developed democratic society could turn, after just 12 years, into a society which was not only able to accept this obvious injustice, and this violence, but which helped to make this happen."

This opera, and a lot of the films that you do, are very particularly Czech. Do you feel a great sense of patriotism - you're still living in Prague after all of these years and you have just written an opera about Milada Horakova, a national emblem?

"I mean, I am Czech. And that's my history. It's the history of my mother, it's the history of my parents, of my grandparents. When I started to work on this opera, I asked several of my friends and relatives about it. And they were scared to talk about it. I mean, we are now 17 or 18 years on from the velvet revolution, and people that grew up under communism are still feeling like it isn't over." Not only is Bohuslav Martinů one of the most famous Czech composers, but next to Antonín Dvořák he is also the most played. Born in…