A female student is taking legal action against a Prague school that refused to allow her to wear a hijab, her lawyer told the Czech News Agency. Two young Muslim women left the Prague 10 Medical Secondary School in 2013 after being barred from wearing the headdress. Ombudswoman Anna Šabatová has supported the women, describing the institution's actions as indirect discrimination. The school says its rules don't allow students to have their heads covered. 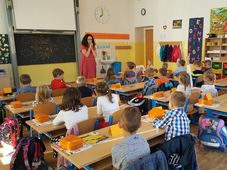 Headmasters at Czech schools most overburdened by administration in EU, study shows

Underpaid and swarmed with paperwork, headmasters at Czech schools do not have it easy. At least according to a new study published…

In a speech at a Holocaust conference in 2015, President Miloš Zeman falsely claimed one of the nation’s most respected journalists…

On her first day in office as the new Czech justice minister, Marie Benešová, unveiled her plans for reforming the Czech judiciary.…