Social Democrat MP floats idea of deal on radar base

Opposition Social Democrat MP Miroslav Svoboda has told Czech newspapers Mladá fronta Dnes and Právo he could envision his party supporting government plans for a US radar base in the Czech Republic in return for the government’s retreating from a proposed bill on church restitution. The MP clarified, though, on Friday, that he would vote along his deputies’ clubs lines when it came down to a decision in the lower house. Mr Svoboda said his aim was simply to broaden discussion. Deputy party head Bohuslav Sobotka suggested in reaction on Friday that exchanging the radar plans for church restitution made little sense, given that the latter bill has stalled in government and might not go through. 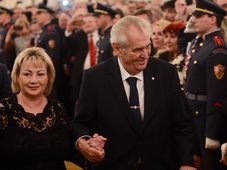 Current Czech president Miloš Zeman could be described as ‘the comeback kid’ of Czech politics. Of course, Zeman, as the second oldest…