The Czech Republic’s oldest citizen, Magdalena Kytnerová, has died at the age of 108 in the Moravian town of Kroměříž.

She was born on March 17th of 1911 and her life spanned the end of the Austro-Hungarian Empire, the birth of an independent Czechoslovakia, two world wars and the country’s return to democracy after forty years of communist rule.

There are currently over 430 centenarians living in the Czech Republic, the majority of them women, and their number keeps increasing. 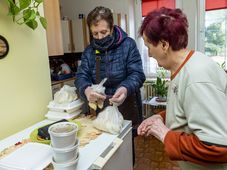 Local authorities and community aid groups have come together to help the most vulnerable in society to survive the coronavirus epidemic.… Sociologist on “DIY”: people like to do something creative

Czechs like to describe themselves as a nation of people who are innovative and manually skilled. There is even a saying in Czech –…