A third of the Senate's 81 seats are being contested, but only one candidate was elected in the first round. The remaining 26 seats will be decided by a runoff next weekend. The main opposition Civic Democrats made the strongest showing, sending 19 candidates into the second round. They were followed by the ruling Social Democrats. The Senate has little real power, as vetoes can be overridden by the lower house. But its consent is crucial for changes to the constitution, and the elections will influence who is to succeed President Vaclav Havel in February. 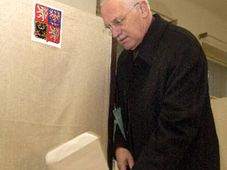 Civic Democrats and independents do well in Senate and local elections

Over the weekend Czechs across that country went to the polls to elect members of the Senate and local administration. The governing… Round one of the Senate elections complete, regional elections to commence this weekend

The first round of Senate elections took place on the weekend. In the elections a third of the Senate were contested, only one candidate…