There were mixed results for the four Czech teams in action in the first round of football's UEFA Cup on Thursday evening. Liberec beat Red Star Belgrade 2:0 at home, though Slavia Prague could not convert home advantage into success against Tottenham Hotspur, losing 1:0. Sparta Prague look well placed for the second leg, after beating Hearts in Edinburgh, while Mlada Boleslav face a tougher challenge after losing 1:0 away to Olympic Marseilles. 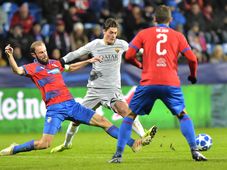