Man sets himself on fire on Wenceslas Square

A fifty-four-year-old man set himself on fire at the top end of Wenceslas Square on Friday afternoon. According to eyewitnesses he doused himself with a flammable substance and set himself alight. Bystanders rushed over to help. He was taken to hospital minutes later. According to early reports the man suffered burns to 30 percent of his body and is in an induced coma.The motive for his action is not clear.

The incident coincides with a week of events commemorating the legacy of student martyr Jan Palach who set himself on fire fifty years ago in protest against growing public apathy to the Soviet-led invasion of Czechoslovakia in 1968. 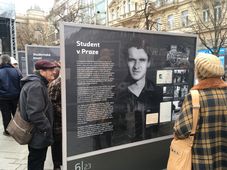