The Lebanese authorities are investigating the death of a Czech tourist as a case of criminal negligence. The 46-year-old-Czech reportedly died after falling into a ravine in bad weather. His call for help on the emergency line 112 went unheard and he died of his injuries several hours later. The police have detained two people in connection with the incident. The Lebanese Interior Minister Marvan Sarbil has promised a thorough investigation of the affair. He said that while the lapse may have been caused by a language barrier the operator should have responded to the emergency. 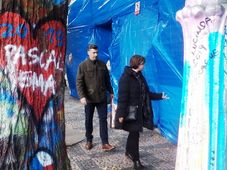