Around 150 far-right extremists marched through Svitavy on Saturday in support of skinhead Vlastimil Pechanec, who received a 17-year jail term for the killing of a Romany man in the town. The protestors chanted slogans including ‘show trials’ and ‘Pechanec isn’t a murderer’. Meanwhile, around 30 anti-racism campaigners gathered at the bar where he stabbed Ota Absolon twice in 2001. Absolon, who was 30, died in hospital a few hours later. 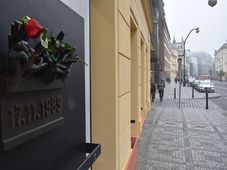