A number of ceremonies have been held in the Czech capital to mark the anniversary of the historic Prague Uprising, which began on May 5th, 1945, a few days before the end of World War II. One of the main events took place on Friday in front of the Czech Radio building on Prague's Vinohradska Street, the scene of some of the bloodiest battles of the uprising. In May 1945 around 30,000 of the city's citizens fought the Nazis over three days, with more than 1,500 losing their lives. 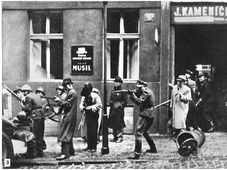 Prague Uprising: How the last German-held capital fought for freedom

Paris, Lviv and Prague, over a thousand miles apart yet connected by the fact that they all initiated successful uprisings against…