Czech filmmaker Marie Dvořáková received a Student Academy Award for her short film ‘Who is Who in Mycology’ at a ceremony at the Samuel Goldwyn Theater in Beverly Hills on Friday night. Dvořáková is the second Czech winner of a Student Oscar, after Jan Svěrák, who got it in 1989 for his short film Oil Gobblers.

‘Who is Who in Mycology, which has been chosen as the bronze winner in the narrative film category, is Marie Dvořáková’s graduate film at the NYU Tisch School of the Arts. The film was shot in Czech-US coproduction with Negativ Film Production and Czech Televison and it was supported by the Czech Film Fund.

Coronavirus: Staying in touch is vital

The coronavirus pandemic is already changing our lives. Many everyday activities have moved into the virtual world. This applies especially… 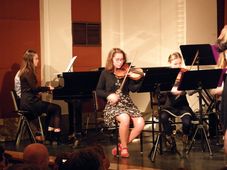