This week, the Czech music world mourned the death of one of its more prominent stars, Karel Hála, who died aged 74 in the Czech capital, Prague. Mr Hála was known as a singer of swing music, similar to the rat-pack music sung by the likes of Frank Sinatra and Dean Martin. Here’s a clip from the song “Že prý někde padají ” or the more familiar title “Pennies From Heaven.”

Karel Hála was born on 2 October 1933 in the Czech town of Hradec Králové. Between 1949 and 1954 he studied singing at the Prague conservatory. He began his performance career by singing in an army musical ensemble, something that artists were permitted to do under the communist regime instead of full on military service. From there, he began to perform in musical theatre at such venues as ABC, Apollo, Rokoko and Karlín. This is Karel Hála singing the classic “Hádej Matyldo” better known as “Waltzing Matylda” in the late 60s.

In the 1960s, Hala appeared in a number of television roles, before making appearances in several feature films including the World War II film Nebestí jezdci (1968) and the comedy film Svetáci (1969). But as the global musical renaissance of the 1950s and 1960s continued, it was Hála’s performances of swing music that brought him the greatest fame. Here’s a clip of Hála singing “Noc na Karlštejně” or “Night at Karlštejn” in 1974.

Karel Hála released several albums during his career, and his style was unashamedly popular although he did occasionally branch out into jazz and even operetta. The singer also worked with several of the other “big names” in Czech pop music, and in particular Karel Gott, who paid tribute to the musician after his death, calling him a “great legend.” Here’s Gott and Hála singing together in the hit song “Dívka Toulavá” or “Roaming Girl” in 1974

From the 80s onwards, Hála’s star began to fade, and he began to battle with alcoholism. Following the Velvet Revolution, the singer moved away from Prague and withdrew from the spotlight. He did however resurface on the public stage from time to time, including an appearance in the 2004 film Non Plus Ultras. On Sunday 6th July, Karel Hala complained of stomach pains and was taken to hospital. He died a day later, after reportedly suffering a burst artery in his stomach. Karel Hala will always be remembered as one of the popular musicians whom during a time of great upheaval in Czechoslovakia, for better or worse, shunned protest music in favour of simple and uplifting entertainment. 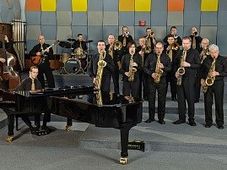 Big Band of Czech Radio celebrates 50 years of its existence

The legendary Big Band of Czech Radio is celebrating 50 years of its existence. The history of the band goes back to the 1960s, when…