The Czech economy is slowly recovering from a long period of economic downturn but in some parts of the Czech Republic the recession is far from over. One of the worst hit areas is the north-eastern Ostrava region where more than 100,000 people are unemployed. Ostrava is now bracing for worse as some of the major employers such as coal mines and steel works are facing serious difficulties. 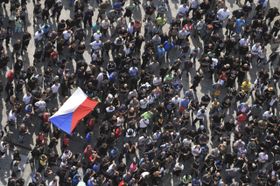 Anti-Romany rally in Ostrava, August 24, 2013, photo: CTK The city of Ostrava saw a major ethnic riot on Saturday with some 1,000 people joining the massive protest targeting the local Romany community. On that day, anti-Romany rallies were held in five other Czech cities and towns but in Ostrava, the protest got violent and at one point, a group of far-right radicals attacked a building which they thought was inhabited by Romany families.

Racial tensions in the Czech Republic have been escalating for some time now. The reasons behind the surge are manifold but extremist and neo-Nazi groups have managed to exploit the frustration many people feel with deteriorating living standards, rising unemployment, and dysfunctional public administration.

The Moravian-Silesian region has one of the highest jobless rates in the country. Over 100,000 people have been unable to find work. The time people on average spend looking for jobs has increased to over 600 days, and is some 120 days longer than the national average.

But things could get much worse. Last week, one of the major employers in the region, the coal mining firm New World Resources, or NWR, posted a much bigger lost than expected. In the first six months of this year, the company lost over 400 million euro, and announced it might have to close down some of its plants in the area. Jan Fabian is the CEO of OKD, a mining company owned by NWR.

“For us this means that we’ll have to analyze the sustainability of each and every one of our operations. We’ll need to cut corners in the company and streamline its administration; we’ll have to look at which mines, which plants and operations can survive under the very harsh conditions which might last for some time to come.” 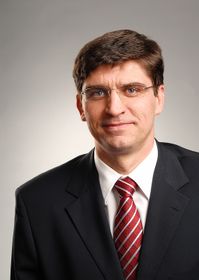 Ján Fabián, photo: archive of NWR Falling prices of coking coal have been cited as the major reason behind NWR’s massive loss. The company is considering temporary or permanent closure of the Paskov mine which would cut some 2,500 jobs. Bur Mr Fabián says the firm has not made that decision yet.

“The company has to react to this in one way or another. We have already taken some steps, and letting some of our employees go is just one possibility. But before that happens, we need to have detailed analyses available and only then we’ll make a decision.”

The condition of other major employers in the Ostrava region makes the threat of a sudden hike in the number of the unemployed even graver. The ArcelorMittal steel works, which buys the bulk of NWR’s coal, has denied reports it was planning to close some of its Czech plants. But in May, the firm’s CEO Lakshmi Mittal told the New York Times the company might do just that if demand for steel remains weak.

The Czech government has reacted to the situation by setting up a monitoring commission but when it comes to actual efforts to help the troubled companies, its hands are very much tied. Industry and Trade Minister Cieciala addressed these issues in the lower house of the Czech Parliament last week.

“One job in the steel works creates between four and six jobs in supply firms up and down the stream. One job in coal mining and coking plants creates another two or three jobs. If we look at the worst case scenario with these firms going under – and the risk is quite high – that means 70,000 unemployed people in the Ostrava region.” 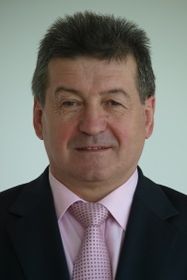 Jiří Cienciala, photo: archive of the Czech Government “First of all, I think we should do what they did in France, in Slovakia and in Poland. Their governments invited the owners of the troubled companies and asked them, ‘what are we going to do next?’ We don’t want to harass them, and we realized their firms are privately owned. But we need to anticipate how much money we will need to prevent a large-scale meltdown, and to avoid having unemployed people marching through the streets of Prague with pickaxes in their hands.”

The mining firm NWR is hopeful that with the German economy showing signs of recovery, it might be able to avoid massive layoffs after all. I discussed the company’s condition and outlook with Petr Smutný, the director of Business Recovery Services department of the consultancy PricewaterhouseCoopers.

“This significant loss indicates the company is in serious difficulties although you need to asses this from two angles. One of them is their cash position, and the other is actual results.

“The lost has been caused by posting additional provisions and approvals for restructuring costs and write-offs of certain assets but the cash position will very much depend on the creditors and banks as well as the firm’s operations.”

NWR admitted it might be forced into an early repayment of their credit. How likely is that, and what would it mean for the firm?

“There are two issues – one is that NWR’s main operation is OKD in Ostrava, and OKD is one of the major employers in the region. Also, we cannot ignore the elections that will take place in two months’ time, and I believe any sort of enforcement or acceleration would cause significant destabilization in the region. So I would expect the management to make the best efforts in the next two months to avoid and accelerated action.

“Another point is that many creditors are certainly concerned about the company’s ability to generate cash and repay its debts. The company is now most likely in breach of certain covenants, and the outlook – which is pretty much driven by coal prices – is not stable and the expectations are that prices will not increase. That’s a key driver behind the company’s current difficulties and cash drain because the firm has higher costs than the selling prices.” 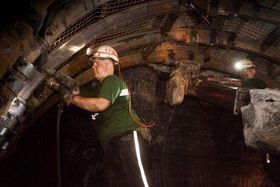 Photo: archive of OKD NWR said they saw signs of price stabilization in the coal market; they also said there was some positive news coming from Germany and its labour and manufacturing markets. But they also noted there would be no such boom the firm saw some years ago. But just said the prices are far from stabilized – so do you think the company is in for more trouble in the coming months?

“Look, we have seen a significant decrease of the prices, I think it was more than 60 percent. Coal is currently being trade at 130 US dollars per tonne. You are right, the expectation is it might go up by some 10 US dollar per tonne. But who are the company’s key customer? Steel mills and coking plants in the region, and you can see that steel is struggling, the volumes and expected prices are down and I don’t honestly see any speedy recovery.

“The company is also taking some steps in the right direction, it is undergoing significant restructuring but that is going to incur considerable costs. So there will be pressure on the cash flow.

“Another driver is that the company is planning to dispose of certain assets such as the Paskov plant and some coking plants, and so on. But given the uncertainty, there might be a big risk for the buyer because the company might end up in insolvency and that transaction may be challenged by the trustee or the creditors.

“So far as the outlook is concerned, I would say that if the management takes the right actions and is able to negotiation some sort of stand-still arrangement with the creditors, then it may be able to survive. But you must not forget that one of its bonds is trading at 38 percent, the other at about 60 percent, and I’m sure there are certain investors who are buying the bonds at this discount and who might be planning some accelerated action against the company. That could be the trigger which will cause significant destabilization of the business.” 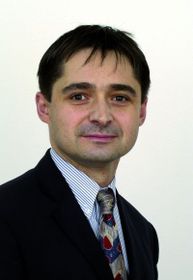 Petr Smutný, photo: archive of PwC “The key solution is to gain flexibility. I’m sure the market will pick up sooner or later and it will be possible to sell coal on the market at profitable prices. The question is when.

“Also, the government might be monitoring the situation but in my opinion, they have a very limited scope of options. We are part of the EU, and you might know that any state aid particularly in the steel and coal industry is very closely monitored, and any government intervention would be subject to approval by the EU.

“It would be quite challenging to find instruments and solutions that would not be rejected by the EU. So the government may have some options but I think the space is very limited, and it will be very closely monitored by the EU.”