The Czech Republic this week announced record export figures for the year 2015. Several factors were clearly at work including the low crown policy of the Czech National Bank. But the government would also like to take some of the credit, and especially the government agency for boosting Czech companies’ export performance abroad, CzechTrade. 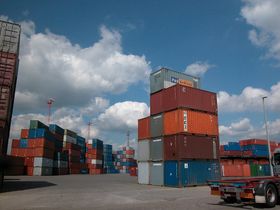 Photo: fishtik / freeimages The 2015 export figure of 3.9 trillion crowns is a new record for the country, with a jump in services and goods sold abroad of just over 7.0 percent compared with 2014. That was the overwhelming good news. But a slight concern for Minister of Industry and Trade, Jan Mládek, was that the share of those exports heading to EU countries climbed to 84.5 percent. The government had been hoping to boost exports to non-EU countries, for one reason because the profit margins for companies are often a lot higher.

But the fall in oil and gas prices last year denting the purchasing power of a lot of Czech export countries outside the EU, such as Russia, Azerbaijan and Kazakhstan. The conflict in Ukraine and across some of the Middle East dented some of the prospects there.

CzechTrade estimates that it was an intermediary for 1.3 billion crowns of Czech exports last year, that’s an increase of around 28 percent on the 2014 figure with nearly 1,100 Czech companies taking advantage of the offer.

A key to that increased activity has been the fast transformation of the agency over recent years with a network of 46 offices worldwide now established and more offices scheduled to be added this year in Bangalore, India; Canton, China; Lagos, Nigeria, and another office in the US to supplement the existing one in Chicago.

“We now fully focus on expansion outside of Europe.”

Radomil Doležal is the general director of CzechTrade. I asked him first of all how it had broadened its offer to Czech exporters over recent years.

“Originally Czech Trade was the agency focusing on the European market. In the last seven or eight years a worldwide expansion in five continents was started. The general return on this investment is very clear here. We increase our services and the amount of services offered to Czech exporters and the quality of services we can offer to exporters today.”

Going forward, how do you see developments? You mention that you want to expand both your offer to Czech companies outside Prague and in the regions and maybe in the offices where you exist already to try and bring in more interest from companies…

“Our activity in the region means to present more what we are able to do for Czech exporters so it is more about communication and how to sell our most important asset abroad which is our foreign offices. And in terms of expansion, as I said, we now fully focus on expansion outside of Europe.”

Coming back to one example that was given today, Hungary. Why was such a dramatic expansion in the business in Hungary possible? Everything is cyclical, sometimes you can get a big contract, or a few contracts, and that makes the figures go up really high, but why was it possible this time round in Hungary? Radomil Doležal, photo: archive of CzechTrade “I think the general answer is that our offices considerably increased the amount of services they provide so they are first of all more productive. And they also expanded the toolbox of their services, They brought a bit more creativity to the game. They expanded the number of special events they organize and they focus more on the market opportunities and start to analyze the market more to find these opportunities. This means that there is an increase in day to day activities.”

You mentioned the supply days, maybe you could explain how these days work and what results you are getting from them because they are something that is fairly new, yes?

“Czech Trade has a set of core standard activities given for the services most demanded for Czech exporters, but in addition we have new activities like the sourcing days to bring the main European ore even global players on certain industrial sectors to the Czech Republic and to provide them with good counterparts with a certain quality and capacity. I think these are exactly the steps that bring new horizons in our results.”

And have these been quite successful so far?

“Yes, yes, if you see the chart I presented, in general Czech Trade doubled its output compared to its historical performance. I would say in the world today, which is not booming in terms of performance, I think if you increase the performance by 100 percent then you are doing fine. I am fully satisfied with the performance of my colleagues.”

“Czech Trade doubled its output compared to its historical performance.”

The minister mentioned some problematic markets at the moment, Ukraine, Russia, some of the Stan countries and maybe even countries in the Middle East. How concerned are you that you will not be able to keep up the performance you had last year this year?

“We operate in 50 countries, we operate in a portfolio of countries so we are able to manage the risk of a drop in some markets by the increases in other markets. I would say it is a reality of the business world today. I mean, you can hardly have an increase in all the markets but you can clearly increase your activities and on average you manage within a portfolio of countries the increase in your activities.

One of the stars of the CzechTrade annual results presentation last week was Tibor Bial, the head of the Budapest office for the agency. That witnessed an astonishing jump in the export opportunities it brokered last year to more than 455 million crowns from just over 8 million crowns in 2014. Mr. Bial said that result was very much the fruit of previous initiatives and time invested in growing the presence of Czech companies on the Hungarian market:

“As you know business success is a bit an investment of time, effort, and energy. And of course, it comes back. That was why last year was according to these figures so successful. I hope that this story will go on.”

And were there some specific examples that you can pick out from last year, some results from the work you did previously that increased the success so much?

“We are able to manage the risk of a drop in some markets by the increases in other markets.”

“In the automotive sector we have a long term cooperation. We work for one and a half years and we have a corporate agreement for this year also with the company ITW, which belongs to the big ITW group. They have their own company, factory, in the Czech Republic and they are producing mainly for the auto industry. We are cooperating with them trying to open new markets, new opportunities, new potential business. We are searching for new projects for them and somehow like an advisor…”

You are trying to find Czech suppliers?

“Of course. We have the same sort of cooperation with the gastronomy sector. This year we will be attending this fair, SIRHA, which is very popular at the moment and there will be the European championship of Bocus D’Or. We cooperate with Czech companies and next month we will have one direct presentation for one Czech company, XO Foods, for which we will make a cooking exhibition and presentation of their raw materials for fine dining restaurants. For Škoda Auto also we have a very good cooperation. But there are several…in the building industry and machinery which is a strategic industry and historical industry for our cooperation.”