The Czech tourism sector has something to celebrate following the announcement last week of record incoming visitors for 2016. But all is not rosy in the sector with some arguing that more could be done to promote tourism and others saying that established businesses playing by the rules are being undermined by those, especially in the so-called new economy, who are flouting them and undermining fair competition. Photo: Jolana Nováková The title of a discussion this week organised by the Czech Chamber of Commerce was along the lines of ‘Czech tourism in crisis or preparing for still better days.’ The word crisis probably was a bit jarring for most of the audience and participants given the fact that the sector has just announced record incoming visitor figures for last year. And that was the argument put forward by the Minister for Regional Development, Karla Šlechtová. The regional development ministry has the main responsibility for setting out tourism strategy.

ʺIncoming tourism is growing. It’s growing from every state. The annual average is of 7.0 percent. For the last nine quarters the total has been rising without interruption and is not going down. This is very positive as regards the number of tourists coming to the Czech Republic, the amounts they are spending, the number of nights they are staying and everything like that.˝

Actually the latest figures of 31.1 million foreign visitors last year did have some downsides. There were more day trippers making up that number meaning that they did not spend the night and spend a good chunk of their foreign currency. Broken down, it worked out that 12.2 million stayed the night, 16.2 million were on one day visits, and 2.6 were just passing through, perhaps tanking up on petrol or something to eat at the most.

Incoming tourism is growing. It’s growing from every state.

And there’s a frequent bugbear that Prague, second city Brno, Český Krumlov, and the spa destinations of Karlovy Vary and Mariánské Lázně are getting most of the visitors and incoming income while many other towns and cities are just getting the crumbs from the tourism table.

Minister of Culture Daniel Herman suggested the Czech Republic is now beginning to cash in on its greatest asset, its cultural heritage and legacy. And he quoted a predecessor in the post, Pavel Tigrid, who described those cultural treasures as the Czech equivalent of the Cote d’Azur or Costa del Sol.

ʺIn spite of the fact that we don’t have any sea, monuments are our sea. The great wealth of heritage that we have is without comparison. In France, Switzerland, and other countries, there are various specific monuments, but they are not in any way equipped or have the same sort of interiors as our ones. The Czech Republic is truly an exceptional place and the monuments are a magnet to people from around the world.˝ 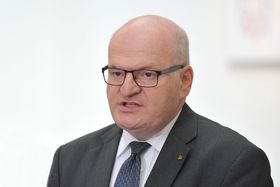 Daniel Herman, photo: Martin Svozílek The minister brushed off any suggestion of crisis. If this was crisis, there should be more of it, he quipped.

Challenges indeed. Some of these include the current difficulty of employing people in the sector, one that it should be mentioned that is renowned for its relatively low pay and poor conditions. The difficulty of getting employees with a wide range of language skills that might be able to deal with guests in their own language. And the fact that the services many tourists might be looking for are still absent outside may of the many tourist hotspots although these are the sort of jobs that would be most welcome in many parts of the country. And then there’s the question of how quickly rules will be introduced at a local or national level to stop some pats of the new economy, such as those offering accommodation on Airbnb, from undercutting traditional tax and fee paying businesses.

And it was not all back patting and congratulations. For one thing, the tourism sector is facing the fact for the ongoing period from 2014-2020 it can look forward to no, that’s absolutely zero, European funds for tourism development in the country. In the previous period the total was a whopping 54 billion crowns. True, there is still a smattering of European money now, but that’s relatively small change and just for border areas.

The great wealth of heritage that we have is without comparison.

The Ministry of Regional development is trying to do its bit to cushion the European shortfall in funding by coming up with 600 million crowns of its own funding for the tourism sector. Half of that has already been spent. One of the main targets of this funding is to encourage local councils and regions to dip into their pockets as well and supplement the funds being offered by the ministry. At the same time, the ministry is also trying to chart how much is currently being spent on tourism development by regional councils with a top ministry official already hinting that there are very big disparities indeed in spending.

What the ministry would also like to see is the merging of the currently separate Czech accommodation and spa taxes into one overall payment and encouragement for local councils to pour back tourism earnings back into the sector again. Here again though, the ministry insists that it can only push and encourage but cannot tell local and regional authorities what to do. Photo: Tomáš Adamec The multitude of actors in the Czech tourism sector is a fact admitted by all. To spell it out in part, there’s main ministry, and others, such as culture, environment, and agriculture. Even the foreign ministry, has a determining role in determining the visa policies for visitors; and the difficulty of getting visas for Russians, Chinese, and even US citizens is one ongoing gripe of the tourism sector. There are the state agencies, such as Czech Tourism, and there are the regional government, local city councils, and town councils. And one argument for an all embracing new law on tourism is that it could attempt to set out some order to this system. But that’s one policy that minister Šlechtová is not pursuing at the moment although it is an evergreen demand of the Czech Chamber of Commerce and Tourism, the biggest group representing the sector.

And the failure of the regional development ministry to give more of a lead or for a wider shake-up that would give more tourism powers to regional councils is highlighted by Czech member of the lower house for the TOP 09 party and former tourism sector manager Kristýna Zelienková. She argues that the ministry has done little by itself to contribute to the boost in the latest tourism figures.

If we are talking about rising numbers, it’s not because the work of the ministry.

"I see no progress in tourism in any kind of way. If we are talking about rising numbers, it’s not because the work of the ministry. It’s because the economy is changing and its automatic growth and nothing that has been done by the ministry.ʺ

Zelienková says tourism, in spite contributing more to the economy than agriculture and employing many more people, an estimated 5 percent of the population directly in travel and tourism and maybe up to 10 percent if the indirect jobs are added, is still a Cinderella sector with no ministry of its own and a lack of overall coordination in spite of its future growth prospects.

ʺFirst of all, it’s important to say that tourism in the Czech Republic is always like a little sister I would say of the other parts of industry. And it’s important to pay more attention to tourism because I see huge potential for tourism in the Czech Republic. We are talking now about 3.0 percent of GDP but I think that the potential might go up to 10 percent."

She believes that Czech tourism could benefit if it borrowed a page out of the Austrian tourism textbook where regional governments are given more power to develop tourism policy and funds taken out of the sector in the form of local taxes are automatically poured back into it again. 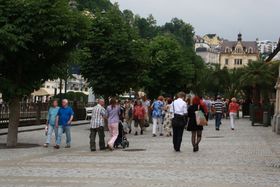 Photo: Barbora Němcová "There is a difference between the Czech and Austrian administration. We have regional governments like the Austrians but they have the possibility to make their own laws. We do not have it this way. It’s only the Czech government that has the possibility to make laws. That’s why the Czech government should provide some form of framework for tourism and set specific rules how it should work and describe in the law the competences of each level. But it’s also a kind of framework for the flow of money because it very important to support small businessmen and local projects in the regions and small villages where we want to focus at this moment.ʺ