The Paris Climate Change Conference is now in full swing with the flagship speeches of national leaders gradually giving way to the hard nitty gritty of detailed negotiations. The European Union has long sought to be in the forefront of moves to push through a comprehensive and ambitious global deal that will at least live up to the target of curbing climate change to 2 degrees Celsius above pre-industrial levels. But what role has the Czech Republic been playing as the EU thrashed out its negotiating position and how easy can it deliver on whatever goals are decided? Those were some of the points put to Greenpeace Czech Republic’s senior energy campaigner, Jan Rovenský. I asked him first of all what is the Czech Republic’s record on climate change over the last decades. 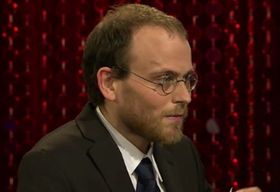 Jan Rovenský, photo: Czech Television “If we talk about carbon emissions per capita, the Czech Republic is one of the biggest emitters of carbon emissions in the world. In fact, we are the sixth biggest emitter among the OECD (Organisation for Economic Development) countries. Our relative responsibility is pretty big. It is fair to comment that in the past it was even worse because during the 1970s and 1980s our carbon emissions were around 50 percent higher than now. There was a big decline of emissions in the early 1990s because of the decline of heavy industry. But from that time, the emissions are at approximately the same level at around between 10-12 tonnes per person. So despite the Czech Republic being quite a small country, our responsibility for climate change in the world context is unfortunately quite high.”

How do you regard the current Czech stance – okay it is already part of the EU overall negotiating position that is in Paris at the moment- but what are the Czechs saying in these closed meeting either within the EU or this broader debate in the French capital?

“The Czech Republic tried to convince the other countries that the 40 percent emission cuts for 2030 is too much.”

“There are two levels. The first one is what is happening in Paris and I am almost certain that the Czech Republic will follow the common European position and that there will be no surprises. But if we talk about climate policy negotiations within Europe, which happened earlier this year, as usual the Czech Republic, together with Poland, Slovakia, and Hungary, was among the laggards, the countries which tried to create as low as possible a commitment at the European level. The Czech Republic tried to convince the other countries that the 40 percent emission cuts for 2030 is too much. So generally, we are on the wrong side. It is especially sad because all of those countries are from Eastern Europe and so without the Czech Republic, Poland, Hungary, and Slovakia, it is almost certain that the European Union would have reacted to climate change in a far better way. But now with this Eastern bloc, obstructing these negotiations, the European position is not as good as it could be.”

But nevertheless, the final European position…they describe as the most ambitious position that has been taken to Paris…would you agree with this? 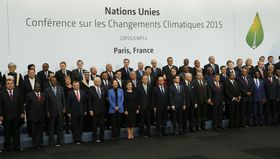 Paris Climate Change Conference, photo: CTK “I would fully agree with this. I would say that despite the reactions of the Czech Republic, Poland, and Hungary, the final European position is not so bad. We would see an even better position if there was unconditional support for 40 percent emission cuts and a higher percentage of renewables, but if we compare it with other countries as well at a global level it is one of the best.”

I am a bit confused about what eventually happened with the renewables targets at a European level. Are these still to be divided between the countries, is that still to happen? This was a sticking point for the Czech Republic wasn’t it?

“As far as I remember, the renewables target is still there but it is not binding. This means that it is more or less for nothing because if it is not legally binding then there will be definitely many countries that will not follow it and there be nothing like the [intended] burden sharing. So I think it is one of the worst things in the European climate package negotiations.”

“The big problem for the Czech energy system and the Czech contribution towards energy change is definitely coal.”

Looking forward, if the strong commitments are arrived, if the European commitments are confirmed at Paris, how easy will it be for the Czech Republic to comply with them and who will carry the main burden for compliance? Will it be the energy companies, transport companies, or across the board measures such as energy saving? Where do you see the main emphasis being?

“The big problem for the Czech energy system and the Czech contribution towards energy change is definitely coal. We produce some 50 percent of our electricity from lignite [brown coal] which is probably the worst fuel if you consider it from the climate change point of view and this will have to change. The new state energy policy expects a big decline of coal use, but probably not enough to reduce it to zero in 2050. If we talk about the 40 percent reduction target, it seems that with the current energy policy it could be possible. I will not say it should be possible but it could be possible and that is because the calculations are not connected with the current levels but with the year 1990. The base year is 1990 and, as I said, there was a kind of unintentional big drop in the early 1990s. So the Czech Republic is just now about 30 percent below base year emissions and so now they need to cut another around 10 percent in 15 year which is probably feasible. But if the base year would be different, let’s say 1995 or 2000, then we would have no chance.” 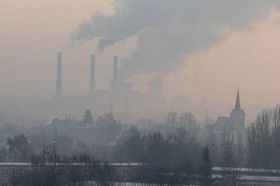 Photo: František Tichý Obviously energy is a big area, but transport is also a big and problematic area, and so is energy saving, where the Czech Republic has not done that well. These areas are all challenges aren’t they?

“We have a huge potential in energy saving and increased energy efficiency. I think that the two most important areas are households and household insulation. If you see the capacity for insulation of most Czech buildings, then it is possible to get them to the passive standard with economic feasibility. Another area is also energy saving in industry because small changes, such as charging of electric motors and things like this, could really improve the energy efficiency of Czech industry by tens of percent.”

The other aspect of what is happening in Paris is aid to those countries which are likely to be most affected by climate change whatever happens and aid to help them stop being so reliant on coal [and other fossil fuels]such as in South Africa and countries in Asia. The Czech Republic does not have a very good record as regards development aid. Do you think this will change?

“I hope this will change. If you listen to our prime minister’s [Bohuslav Sobotka] speech yesterday [Monday] in Paris, he also addressed the help to emerging economies. So I hope it will change. But yes, if you look back to the record, it is really horrible. The Czech provision for development support or development aid is one of the lowest percent of GDP amongst the developed countries. It will definitely have to change and we will definitely try to make the prime minister follow up this speech with action.”

“The Czech provision for development support or development aid is one of the lowest percent of GDP amongst the developed countries.”

And as regards an overall result, you are quite confident there will be a result? Or is it just a question of how strict the final conditions will be?

“Hope dies last. If you look back at the history of the climate change talks, sometimes in the past there was really a surprising moment like at the Kyoto Agreement which happened at 4 or 6 in the morning of the last day of the negotiations. So I definitely hope that Paris will contribute and that there will be a legally binding and ambitious deal. But it is really hard to estimate the chances right now.”