Back to the future for iconic Čezeta scooter

A Czechoslovak two-wheeled engineering ikon is making a comeback. The distinctive Čezeta motor scooter was launched in the 1950s and soon developed an enthusiastic following. But by the 1970s the heyday was over. Now patents for the old design have been bought up and the scooter should go into production again as a top of the range electric vehicle. 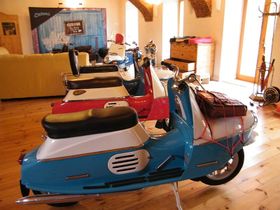 Photo: Michèle Morsa To find out about the rebirth of the Čezeta I travelled around half an hour out of Prague to the town of Mirošovice where a collection of around half a dozen of the former scooters are displayed side by side with the prototype for its new electric successor.

To explain the scooter’s past and the planned future I was joined by Lutz Buennagel, a German who is head of sales, marketing, and operations at the small team plotting the comeback. Mr. Buennagel has a background in the auto industry and he started by describing one of the original Čezeta scooters.

“This bike was developed in 1956 by Mr Koch and it runs more or less without much technical [extras] for 50 years without any real problems. It smells a bit and there are some oil leaks b, but this is traditional. But from a technical point of view it was basic good quality. But the development of new technical aspects was not there. So we took over this bike and the prototypes that we have have the same body. It is exactly the same body. But when we jump from the old bike to the new bike we will have the same design but we will have a new material for the body. So we will not use the same steel. We will use a different steel, a kind of stainless steel that has a lower weight. That will improve the quality of the bike and make it easier to repair. The shape will remain the same. We work with a Czech engineering company and there might be some changes. There might be bigger wheels and due to the brakes there might be some changes as well.“

The shape of the original is very distinctive…It looks a bit like a rocket.

“The name. You know what the Czechs call it? They call it the pig. It has a face a little bit like the pig. For the Czechs this is a positive name. I don’t know how positive it is in English. For Germans it is a little bit left and right. We also have positive attitudes to pigs. We say pigs are for luck, especially for the New Year. But we will not use it in the German advertising. But in Czech, they like the name. The pig is back…yes. “

The original had a lot of storage space?

“Yes, but they did not have the holes here where you can put in a load speaker or other stuff. And you don’t have any pedals or gears.” 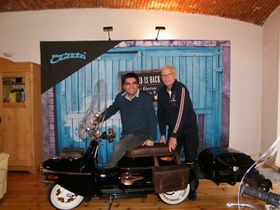 Lutz Buennagel (right), photo: Michèle Morsa “I think they sold around 150,000, but mainly in the connected countries in the Eastern European block and in African countries where they had links, also in Vietnam. There were not many sold in the West. You can find some in Eastern Europe, Eastern Germany, but in Western Germany and West Europe no-one knew it. For them it’s new and we start for them with a new product which is known in this region.”

The electric batteries are placed where ample luggage space used to be located under the seat. It’s reckoned that the batteries will give a range of around 100 kilometres before they will need recharging. Other changes have been made to the bike but the aim has been to safeguard its special character and design. The original was, by the way, reputed to be difficult to ride for women. Mr. Buennagel again:

“Let’s go to the new one. This it the prototype that you can see underneath where the battery comes and here we place the whole of the electrics inside. We will put a radio in here. We will have a connection with a phone, an i-phone or whatever. We will have apps which give you information about the distance of the drive, information about services as well – that is quite linked to the Internet as well. Lower down you can see where there is the big box of batteries. We have new brakes, which will be hydraulic. It is not so light, I must say, but it is more comfortable. If you drive it, it is like an automatic. You just turn it and it goes. You have to train a bit on it, but basically it is easy to handle “

“We will start in April with production for the first 10, where we already have customers signed. And from the year 2016, 2017 let’s say more or less, we will increase that to up to 500.”

And women could use it, presumably?

The story of the Čezeta comeback though begins with a Brit, Neil Smith, who had the advantage of having both an engineering and financial background. And despite his mixed experiences with the original motor scooter, he was convinced that there was something here that could be developed and turned into a winner.

“Neil Smith came to Prague. He was working already in Prague and had met his Czech wife. He saw the Čezeta on the street and he said ’This is basically a nice bike.’ And he bought one. And the first one he bought was a shit. The second one as well. The third one was better. And then he thought this is such a nice bike and no-one is interested. And then he started…you know in Germany we have a phrase for someone like him, he is a fiddler. And he started to look what he could do. And step by step he started to improve it. And he said the best way to do this is by going electric. And he started with his first model and it took two years because it was basically a one man show. And after two years of development he had these two bikes ready and he thought that we should go to the market. And he looked around for support and Alex [Monestier] is technical manager and me, we joined him because we like it. It is a nice project where all of us can bring in ideas. We have a chance to develop from zero.”

With the prototype for the Čezeta 506 completed and European authorisation awaited, the sales and marketing launch is already underway and a cautious build-up of production should get underway in 2016. The marketing and operations manager again: Photo: archive of Čezeta Motors “We will start in April with production for the first 10, where we already have customers signed. And from the year 2016, 2017 let’s say more or less, we will increase that to up to 500 for delivery in the different countries like Central Europe, Germany, Swiss, Austria, France, we think is very important for us as well, and Benelux, maybe Norway, and also Asia, like Hong Kong and Singapore, are interesting from the customer side. The Czech market is important for us because it is the home of the Čezeta so at least we try to have a base of customers here which is solid and interested to keep the tradition alive. What we are doing is a little bit like Škoda [Auto]. Škoda had in the former years a very good name and then they had a break under Communism – you remember the image in England. And so to re-wake a good Czech product with good Czech engineering is a good idea. And we will do that in the next few years to come.”

The original Čezeta was popular even though, for the time, it was a pricey item. One model cost around half of the price of the lowest range Fiat car of the era. And the updated version will comparatively make an even bigger dent in your wallet, being priced at just under 10,000 euros or more or less the price of one of today’s cheapest range small cars. But Lutz Buennagel says that still in the price range for other top electric vehicles.

“It’s not in the lower price range but up market. The whole product is an up market product.”

“Basically the price is in the range of the completion for electric vehicles. It’s not in the lower price range but up market. The whole product is an up market product. And we have the strategy of delivering the bike with a financing scheme where you pay an amount of money up front and with a leasing scheme which is a kind of operational leasing for two or three years and then we will take it back as a used bike. The strategy for us is to use very much the web and networks to get customers on board. So we put a lot of information on our web site which we have just recreated. And most of the orders come now from the web. So we have a special format and you can order on this. But we are trying also to sell it more and more directly to the customers both here and in Europe. So we have the web sets and the traditional sets, which goes either by imports or dealers. In some countries like Holland, the Benelux, and Britain, which is quite important for us, the dealers are quite interesting. Neil will take care of the UK because it is his home country. And we split it a bit. We have the south area, where we have a colleague who is operating in France and Spain, and I do everything and the rest of the world.

And the interest so far is from where? You already have orders…?

“At the moment we have already 10 orders in the pipeline already and from the web we have 20,000 expressions of interest. But you know that does not mean that they will all buy. But we are coming into a good range where we have 100 customers which show real interest and we have to work on this now and see how it goes. What we do now is a lot of activities with press campaigns, with radio stations and television. And on the other side we do a lot of exhibitions, showing the bike in tradition exhibitions like motors shows and bike shows Europe-wide, for instance Milan and Cologne, the big ones. Here and in other regions we also go and present the bike to potential customers, for example in Munich, together maybe with BMW, in a hotel to invite people, or we do it to present the bike in big shops like Bat’a or Arcadia or something like this. That is how we are moving. We think it is important that the customer can touch and see the bike. That is why we are increasing the test driving so that everyone can come and put themselves on a list of test drivers and he can get the feeling of the old one and the new one. The old one is still nice to drive but it is a bit tricky, if I have the right word. And the new one is easy handling. Even if you are not a technician you can move it without any problems.”

With electric batteries evolving fast and legislation in the pipeline in Europe and most of the world clamping down on polluting petrol vehicles, the backers of the comeback Čezeta 506 reckon they are in the fast lane into the future. 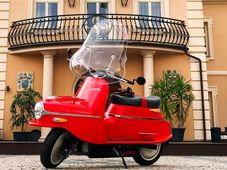 Englishman Neil Smith is behind the rebirth of a distinctive and iconic Czech scooter from the 1950s and 1960s – the Čezeta. It’s distinctive shape… 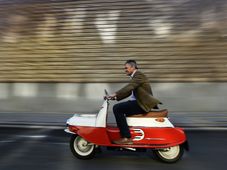 A Czech manufacturing icon is making a comeback with a new design and new power source.