Accelerator seeks to help Czech companies put down roots in US

Czech companies, even the biggest of them, do not have a sizable footprint in the United States. The value of Czech exports to the US is approaching around 100 billion crowns, which sounds a lot but is probably a bit disappointing given the size of the overall market. But an initiative from a US businessman with Czech roots is looking to address that problem and has already got a handful of local companies up and running on US soil. Gerald Rausnitz, photo: archive of Meopta Gerald Rausnitz is the general director of the Meopta Group, a multi billion crown business which spans the Atlantic. Rausnitz’s family has Czech roots, they emigrated soon after the end of World War II fearing the approach of Communism.

And in some sense history came full circle when the company created in the US by the Rausnitz family, which was initially based on grinding wheels, came to be one of the main partners and finally investors of the Meopta Czech precision optics company focused on the Moravian town Přerov.

And it was the Czech-American connection that got Gerald Rausnitz thinking about the problems facing small and mid-sized Czech companies to make it on the US market. The answer was unfolded at the end of September in the form of what has been described as an accelerator, called Meohub, for Czech companies to take off in the US. It is located just outside New York at the site of Meopta Inc’s US headquarters. I asked Gerald Rausnitz whose idea the accelerator was.

“The answer is that it was my idea and the reason is that we have a strong presence in the Czech Republic where we have 2,500 working and we had Meopta Czech and we have a location here which is called Meopta USA. And I said it would probably be a good idea to bring companies over simply from the fact that we understand the US market, we understand the Czech market, and we have a number of things going on between as well as the fact that we have people here that speak the language. And the language is a big barrier.”

The connection is with a Czech company established already in the 1930s that became a major force in optical equipment and cinema projectors and a significant supplier to the Czechoslovak army. It was privatized in 1992 and has successfully since sought a series of civil applications for its know-how with military sales now just a small slice of the overall turnover. Gerald Rausnitz takes up the story.

“We are looking for companies that have unique products, strong research and development, strong management and experience of companies that don’t speak Czech.”

“We have a company in the Czech Republic with 2,500 people. We have three different groups and I’ll give you a fourth. One is optical production: 600-700 people. Mechanical production: 500-600 people. Assembly: 300 people. And we have R&D, and we can do research and development in a bunch of different areas that are optic related. So we have one area that is simply sports optics where we build rifle scopes, spotting scopes and binoculars under the name Meopta. We also build them under others people’s names. We have a second area which is industrial, where we will build product which will be for different areas, such as digital projection for the cinema, for 3D and things of that nature in the big cinemas. We build inspection equipment for looking at semiconductors and finding defects. We build medical equipment for doing diagnosis and things of that nature. And then military, tank sights and things of that nature.”

The search for companies that could qualify for the accelerator was undertaken with the help of the Czech Association for Small and Mid-Sized Companies.And there was a fairly clear idea of what sort of firms could qualify in the corporate beauty contest.

“We are looking for companies that have unique products, strong research and development, strong management and experience of companies that don’t speak Czech. Those were the first gates, so to say. And then we decided when we had a lot of potential to start off slow because we had not done this before and we wanted to do “hand holding” at the beginning when these companies came in.”

Hand holding amounts to providing offices, legal services, help with patents if necessary, and marketing advice, from the US host. But don’t think that this is pure altruism, it’s not. Meopta INC in the US will take a 20 percent shareholding in the US units being founded by the Czech companies. And that means it has a clear stake in their future success. Gerald Rausnitz is optimistic about the handful but wide ranging firms that he is backing in what amounts to a cautious pilot run. 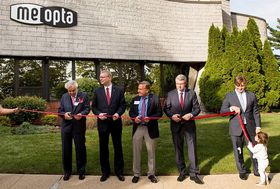 Opening ceremony of MeoHub, photo: archive of MeoHub “I believe they will all be successful. The question who will be the most successful, I am not sure of. So there is one company which is called Proworks, which makes chairs which are called Therapia. There is another one that is called Holík that makes gloves. There is another one that is called Bushman that makes…I am going to call it outdoor clothing for the sports enthusiast. There is another one called Beta Control. They make electronics. They make home automation. They make speciality windshield wiper fluids for petrol stations. And there is a fifth one called Hamé which is one of the largest producers of food, canned food etc in the Czech Republic.”

Hamé, which indeed is a well established Czech company with export markets in much of Central Europe, is actually a late addition to the first five, which also comprised RoMill, a Brno-based company which started out making technology for animal feed and has gone on to specialize in the multiple industrial uses of microwaves for everything from drying to gluing and speeding up processes.

The Czech companies in the accelerator will be under what amount to a friendly eye. And their US sponsor says that it has kept the numbers down this time round so that it can better check on how they are doing.

“The companies should and will grow. And we have put a team together that will come here and follow them. It will see what their sales are and what they are doing and where they are going. We set up a template, which we will do every month and three months, as to where this goes and how we make it happen. It is the first group that is coming out of the box and therefore we are watching it very closely. Now let me say this, this is not our only business. But I think it could be a very large business in the future.“

“This is not our only business. But I think it could be a very large business in the future.”

Actually, MeoHub probably has space for around 15 Czech companies in all. The selection process for the remaining spaces in the project is continuing and the spare places should be filled up over the next months. And Gerald Rausnitz believes that once a few Czech companies are established and flourishing then they will, like is so often the case with Japanese and South Korean firms, start to form clusters and the early trickle could turn out into something much more substantial.