2012 set to be good year for Czech art market

Over the last couple of years, art sales in the Czech Republic have seen a decline. But this year is different, and it’s not just the record sale of a František Kupka painting that did the trick. The market now attracts collectors who are ready to look beyond the well-established segment of modern art that has topped sales so far. 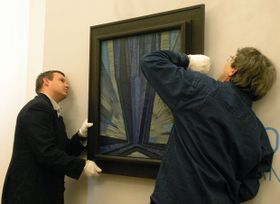 František Kupka - 'The Shape of Blue' The Shape of Blue, a striking abstract painting by František Kupka from 1914, sold for 57.4 million crowns, or over 2.8 million US dollars, at an auction in Prague last month. The sale broke the Czech auction record – also held by a Kupka painting. Vladimír Lekeš, the owner of the Adolf Loos Appartment and Gallery which sold the painting, explains some of the reasons why The Shape of Blue sold for such an immense sum.

“The Shape of Blue comes from the most fruitful period in Kupka’s career. The painting has appeared in numerous publications and has been exhibited worldwide.

“The piece has a unique provenance – it comes from the collection of Jindřich Waldes, a pre-war Czechoslovak industrialist and owner of the Koh-I-Noor factory. Kupka and Waldes met in 1919, and Waldes generously supported him until he was arrested by the Gestapo in 1939.”

The painting’s impeccable pedigree was another reason behind the record sum it fetched. After it was confiscated by the Nazis and then by the communists, The Shape of Blue spent the rest of the century in the National Gallery until it was returned to Jindřich Waldes’ heirs, along with the rest of his spectacular collection.

“The Waldes collection was restituted in 1996 from the National Gallery in Prague. But most of the collection has already been sold and is now in private hands. In the future, only a limited number of artworks from this collection might appear on the market.”

The Kupka sale alone has provided a boost to the Czech art market which went through a significant decline over the last couple of years. But Marcela Chmelařová, the editor of a Czech art investment website artplus.cz, says the record sale of The Shape of Blue does not in fact say much about the direction the whole Czech art market is going.

“It says nothing about the market because it’s the very top of the market, it’s the top segment. There are special investors and collectors interested in these extremely expensive pictures. If we want to talk about how healthy the market is, we have to look at pictures that sell at 50,000 or 100,000 or 200,000 crowns.”

Today, František Kupka is perhaps the best known Czech modern painter. His pieces top the list of the most expensive sales, followed by other artists of the same period such as Emil Filla, Toyen, Josef Čapek, and others. But high prices of early 20th century Czech art have made collectors look elsewhere, says Marcela Chmelařová.

“[Modern art] is the main segment with top prices which is one of the reasons why prices of modern art are quite high at the moment. That has led to another significant trend: buyers now specialize in other areas; they buy works on paper, sculptures, Asian art. All this has now become popular in the Czech Republic.”

Since 2009, when Czech auction sales reached a record high of 751 million crowns, the turnover of Czech auction houses fell for two years in a row, and in 2011 dropped to 645 million. Jan Skřivánek is the editor in chief of the magazine Art and Antiques. 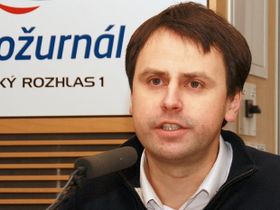 Jan Skřivánek “The art market was worst hit in 2009 after the breakout of the financial crisis when the market went down quite fast. In the Czech Republic, however, the year 2009 was record high and was the best year in the history of Czech auctions. But even though the market was hit by a crisis, it doesn’t mean that top pieces don’t sell.”

Last year, 93 art pieces sold at over ten million crowns, or roughly 500,000 US dollars. That was down by nearly a half compared to the record year 2009. But this year has seen a revival across the market.

“The art market was maybe hurt in the lower segments and middle-class collectors did not buy that much but this segment was not that strong here anyway. Now, I have the feeling that it’s coming back, that in the middle of the market from 100,000 to 500,000, some very interesting sales are happening. That means that either the very rich collectors are looking for value in this segment or people who don’t compete for the multi-million pieces are willing to buy. But it’s hard to tell which is the case.”

While investors consider art a safe haven for their money, the surge in prices might also be driven by dwindling supply. Some top pieces from various renowned collections, including that of Jindřich Waldes, are yet to be auctioned, but Jan Skřivánek says it will be increasingly challenging to keep them coming.

“It depends on the quality of the art pieces. It’s much more difficult for the auction houses to get top quality pieces, and that’s where the competition comes in. They try to persuade art collectors to sell and they compete in what offers them better auctioning conditions. 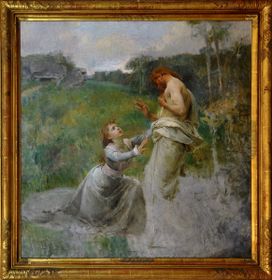 Vojtěch Hynais - 'Christ and Magdalena', photo: ART+ “Sometimes the auction houses say that if you have a good piece, buyers will come no matter what and where you hold the actual auction. But the trick is to find a quality piece that will attract the buyers.”

The demand side of the market is very different. Buyers are now interested in artefacts that until recently generated little attention, says Marcela Chmelařová.

“In 2012 we see many collectors who are very experienced and they choose very special items. For example, a 19th century painting by Vojtěch Hynais was sold last week. Hynais was from the National Theatre generation and his work has not been that popular on the market – but last week, his painting sold for six million crowns while the starting price was 900,000. So that was a special case when collectors are willing to pay special prices for very special items.”

Czech collectors have been rather conservative in their preferences. Early 20th century remains the most popular period by far because modern paintings have proven their value over the years. But Marcela Chmelařová says that post-war art in increasingly coming into the spotlight.

“A special type of collector focuses on these art pieces. These are young people, doctors, lawyers, and so on. They are also beginning to buy post-war and contemporary art which is interesting for them. Five years ago, no one really cared about this.” 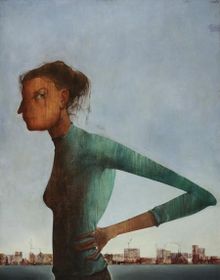 Mikuláš Medek - 'Woman and the city' One of the best selling Czech painters from the post-war period has been Mikuláš Medek but Jan Skřivánek is sceptical about this author becoming the new Kupka.

“I don’t think so. I think he’s already reached the top and he cannot go much further. He’s definitely one of the key figures of 1960s and 70s Czech art but I think that from today’s point of view, there are other artists who are perhaps more interesting, such as Adriena Šimotová, Jiří Balcar, Karel Malich, Zdeněk Sýkora... but all of them are already very well known and fetch record prices.”

With collectors paying more attention to artefacts from the 1960s and 1970s, how is contemporary Czech art doing?

“The contemporary art market is much harder to follow because sales are not happening through action houses but directly or through galleries. So it’s hard to know about all of them. I don’t think that art from the late 1980s and early 1990s is very popular now. These pieces do appear sometimes but I don’t think that it’s a new trend or anything like that.”

The Shape of Blue by František Kupka was acquired by a foreign buyer – a Russian speaker according to media reports. But whoever bought the painting might be disappointed in the end. The National Heritage Institute, which oversees the agenda of monument protection, backtracked on its earlier statement and said the piece is indeed registered as cultural monument. That means it cannot leave the country, and cannot be even sold to a foreign citizen. Vladimír Lekeš from the action house that sold the painting is concerned about the decision’s impact.

“It will be more difficult to find buyers from abroad who obviously want to export the pieces, but also Czech collectors who see artefacts as an investment and consider their future sale abroad. We can say it will isolate us from developments on the international art market, and it will also harm the promotion and circulation of Czech art abroad. 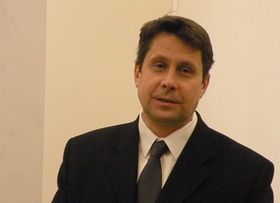 Vladimír Lekeš Mr Lekeš says he is ready to sue the National Heritage Institute and the Ministry of Culture if need be to make sure the painting can be exported. But Jan Skřivánek from the Art and Antiques magazine believes the effect of the ban will be less immediate than that.

“I don’t think it will have such a big effect because foreign buyers don’t play such an important role on the Czech market. There are not that many pieces that would be interesting for them. This was a unique case.

“It would not be a good situation and it is in our interest – even from a cultural point of view – is that does get the permit. Being on the international market would only help Kupka and it doesn’t make any sense to keep it here. But in practical terms, I don’t think it would make a huge difference.”

The auction season has only just begun, so if you’re not concerned about not being able to take the artefacts out of the country, the website artplus.cz is a good starting point to see what’s happening on the Czech art market. 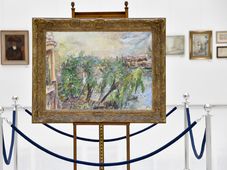 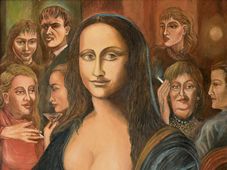