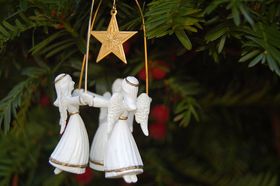 Photo: Julia Freeman-Woolpert / freeimages Hello and welcome to Mailbox, Radio Prague’s monthly programme for your questions, views and comments. With the festive season approaching, we received this query from Karel Smolek:

“Hello Radio.cz, I need help! I am Czech living in Canada for 47 years, my wife is Canadian and my kids were born in Canada. We celebrate Czech Christmas every year and sing Christmas carols. I have a Czech CD and a book with Czech carols, but I am looking for a translation of the Czech carols into English, so that the whole family and friends could sing beautiful Czech carols in English.”

I’m afraid Radio Prague has no knowledge of a published translation of Czech Christmas carols. If any of you, our listeners, have ever come across one, please let us know and we will share the information with Mr Smolek in Canada and our audiences around the world.

Now let’s take a look at your answers to our last month’s quiz question. All of them were correct this time. This is what Meng Cheng from China wrote:

“Franz Hruschka was born on 13th May 1819 in Vienna. He spent his childhood in České Budějovice, and moved to Graz in 1827. He was drafted in 1833 as a cadet of the 19th Infantry Regiment Hessen-Homburg. Franz Hruschka was promoted in 1857 to the major rank with the command of a local unit in Legnago. Major Franz Hruschka died on 8th May 1888 at his flat in the Palazzo Rizzi of Venezia. It's said that angina pectoris was the cause of his death.”

“Franz Hruschka moved with his father to Graz in 1827, where he attended elementary school and three years of secondary school. He studied the Czech language in the cadet's school as well, his Czech language teacher was captain lieutenant Ondřej Krček. He graduated from the cadet school after three years in 1836 and joined up his regiment which was based in Vienna.” 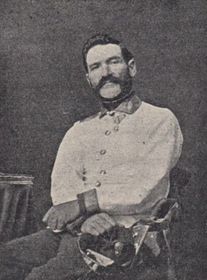 Franz Hruschka, photo: Public Domain “In the year 1848 he joined up the marines and was promoted to ship sublieutenant. He is promoted to the major rank in 1857 and is given the command of the local unit in Legnago, a small city in the Verona area. This event ends Hruschka's army career as on 1st August 1865, in the year of this honey extractor invention, he is retired. He took as his domicile the city of Dolo in the Venezia area, where he had a small farm, which was given to his wife as a dowry. He had a son named Friedrich and two daughters named Antonie and Marie.”

This answer is from Hans Verner Lollike from Denmark:

“It is very relevant to have a person that has something to do with beekeeping, since that has become popular again. I heard your feature about bee keeping in Prague. In Denmark it has also become more popular.

“Your mystery person this time is Franz von Hruschka. He invented a honey extractor based on the power of centrifugation. His invention is still used today. The same technique had been used for years in the dairy processing for extracting cream out of raw milk. He presented the machine 150 years ago at a meeting of Austrian and German beekeepers in Brno.

“His life is a fully central European story. His family comes from Silesia, nowadays Poland. Born in Vienna, he spent his childhood in České Budějovice and Graz – joined the army and stayed in a different part of the Austro-Hungarian Empire. He spent his final years in Italy, spoke at least German, Czech and Italian. He met his future wife in Trieste, she was an adopted daughter of a countess. It stepped up his social rank and gave him some economical freedom. He became a star in his days among bee keepers due to his invention, but died poor and disillusioned after going bankrupt with a hotel in Venice. His grave is unknown.”

“He settled in Dolo, Italy where he had a small farm which had been given to his wife as a dowry where he became a beekeeper. He met his future wife in 1848 and she was as knowledgeable in beekeeping as the inventor. Hruschka kept himself busy in his apiary. He experimented with all facets of beekeeping and became quite known in the beekeeping world. He took part in numerous beekeepers conferences. 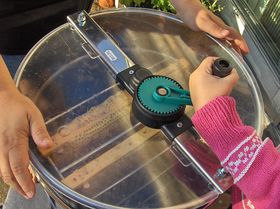 Honey extractor, photo: Attribution ShareAlike 3.0 “The date when Hruschka came up with the idea of the honey extractor is unknown but we know for sure he did the honey harvest in 1864 by crushing the honeycombs and straining the honey. In September 1865, Hruschka announced his invention at the 14th German and Austrian beekeepers’ conference in Brno. Hruschka never claimed he invented the centrifugal machine but there is no doubt it was he who came up with the idea of the usage of the centrifugal force for gaining honey. Hruschka became known to the whole beekeeping world. His invention gained the finest place among beekeepers of all times.

“In his later years, he lost all interest in bees. He lost his holdings. He became a silent loner and in the last six years of his life never went anywhere. He died on May 8, 1888. His funeral had an army band and many civic as well as military attendees. His grave was not marked by a monument; it was discontinued after ten years and his bones were put in a common pit. How's that for an end for a great inventor.”

This answer is from P. Sivashanmugham from India:

“The personality of this month is Franz von Hruschka. Major Hruschka is credited with the invention of honey extractor. He recognised the power of centrifugal motion. He was a soldier, a bee keeper and hotelier. His invention of a honey extraction device fundamentally affected animal husbandry and bee keeping. Hruschka was involved in bee breeding since 1858. He announced the honey extractor invention at the 14th conference in Brno held on 12th to14th September 1865. He established contacts with the leading beekeeping personalities. In 1866 he did interesting experiments with a bee colony living without a hive; it was protected from the rain by a simple roof. He opened a hotel in his house in Venezia and he rented it. Hruschka went bankrupt with his enterprise. He died in the early hours on 8th May 1888.”

Many thanks to all of you who took part in our quiz and this time our prize goes to Qian Xiu-ping from China. Congratulations! For those of you who haven’t been lucky so far here’s new chance:

This time we would like you to send us the name of the Czech-born French tight rope walker, portrayed in a supporting part in Robert Zemeckis’ 2015 film “The Walk”. His character is played by Ben Kingsley.

Please send us your answers by the end of December to the usual address english@radio.cz. You can also send us your questions, suggestions and reception reports to the same address or leave your comments on our Facebook page. Mailbox will be back on January 2nd. Until then happy listening and take care.