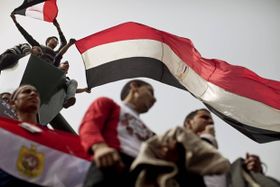 Protesters in Cairo, Egypt, photo: CTK Hello and welcome to Radio Prague’s Mailbox. As promised, today we will reveal the name of the mystery person from last month’s quiz but first up we have these e-mails.

“The rapid developments and events in Egypt did not stop me from listening to and following Radio Prague, as it is a friend and companion to me every day. The end of the shortwave saddens me greatly, but this will not prevent me from following your programs and news. I wish all those in the English section of Radio Prague every success and all the best and I hope that stability will prevail in the whole world.”

Thank you, Mohamed, we really appreciate that you find the time to follow our programmes in such turbulent times and we wish you and your country all the best, too.

Jim Mickeal from Ottawa Canada, too, was sorry to see the end of shortwave broadcasts:

“When I was a child, my father used to listen to shortwave radio and would write to the stations giving reception reports. He received a number of replies including the calendar and Christmas cards from you that are shown in the attached photo. I was very fortunate to have kept these; they are the only ones left from that time period. 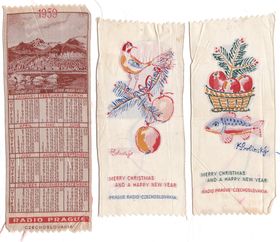 Photo: Jim Mickeal “I remember that we used to listen to faraway stations like yours on a Heathkit receiver using a very long-wire antenna stretching from our house to the opposite end of our backyard. It was an amazing experience to receive such signals from so far away on a cold winter's night in Camrose, Alberta. Since then, I have always listened to shortwave broadcasts, now currently on my 1938 DeForest Crosley vacuum tube radio. I shall miss your station on the air but will continue to listen via the internet.

“Thank you for being part of a special past for people whose hobbies include radio.”

Thank you Jim, for your kind words and for the photo – that can be viewed on our website.

Richard Howard from Great Britain is one of those listeners, however, who say they will not miss shortwave greatly:

“Not too worried about the loss of shortwave broadcasts. This is a world-wide trend and much better 'reception' is obtained via the Internet. Not such a challenge, of course, and a pity for those who enjoyed chasing QSL Cards and battling with adverse ionospheric conditions.”

Just a reminder – QSL cards are still available to those who send us a reception report. The updated form is on our website.

We are always happy if you let us know where and how you listen, as did Mogire Machuki from Kenya: 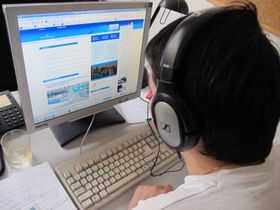 “I am pleased to let you know that I have been listening to a few of your streaming programs. The audio is however remarkable but not all times. I am trying to make my level best to have my apple iPad's wi-fi working.”

In the previous edition of Mailbox we quoted a listener complaining about Radio Prague “pumping out propaganda”. I encouraged other listeners to have their say on the subject and here is what David Eldridge from the UK wrote:

“I cannot but take your bait in the last edition of Mailbox regarding ‘propaganda’. Of course the output of Radio Prague is propaganda. Propaganda is probably the business of every journal and media outlet. It is the task of the consumer to try to understand the propaganda standpoint of the publisher in order to make their own interpretation.

“In contemporary Europe, the output of Radio Prague stands on the right of the political spectrum, particularly as influenced by your right-wing Prime Minister and government’s activities domestically and abroad.”

Your thoughts on the subject are welcome, please let us know what you think, the address will follow shortly.

And before I get to your quiz answers, I would like to wish our listener Michael A. Daley from Danvers, Massachusetts a happy 48th birthday which he is celebrating now as we speak. Have a very happy birthday, Michael, and we wish you many happy returns. 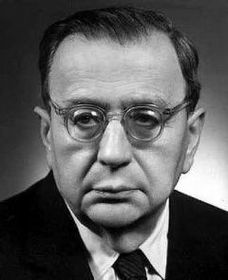 František Běhounek Now onto last month’s quiz in which we asked you to tell us the name of a Czech explorer born in 1898.

“His name is František Běhounek, born in 1898. It was a scholarship in the Curie laboratory which interested him in radio activity and nuclear physics. He was also a popular writer of science and children’s books. He was on the first historic airship Italia flight to the North Pole. He survived the crash and after many weeks he was rescued by the ice breaker Krasin.”

This answer is from Hans Verner Lollike from Denmark:

“The person you are looking for is František Běhounek, born in Prague in 1898, and who died in Karlovy Vary in 1973. He was a real polyglot, top-scientist in radiology and astronomy, explorer and on top of that writer of popular books on scientific subjects and his expeditions. Today science is so advanced that even the best scientists have to concentrate on one subject, and there is hardly any place in the world to explore anymore.”

“When he attended secondary school in Prague, František was a keen reader of the science-fiction novels of Julius Verne. He attended Charles University from 1916, studying mathematics and physics. He graduated Doctor of Science in 1922 and went on to study at the Sorbonne in Paris. There he gained a scholarship based on radiology and led by Mrs Marie Curie-Sklodowska.

“In 1926 Marie Curie-Sklodowska recommended Běhounek to be a member of the Roald Amundsen airship Norge expedition to the Arctic. On that journey he measured the radioactivity of the atmosphere. Two years later Běhounek joined the Umberto Nobile expedition but their airship the Italia was wrecked. They were rescued by a Russian ice-breaker after seven weeks in a small tent on an ice floe. Běhounek was probably the first Czech to fly over the North Pole.

“In 1929 Běhounek gained a higher doctorate at Charles University, where he was an associate professor of radioactivity and atmospheric electricity. He went on to lead the Prague State Institute of Radiology and set up the Observatory of Atmospheric Electricity. Following World War II he worked at the Nuclear Physics Institute of the Czechoslovak Academy of Sciences and from 1951 he was in charge of the National Cancer Institute. Běhounek became professor at Charles University in 1954 and was an expert in UNESCO Research of Atomic Radiation programme. In 1956 he received a PhD degree and in 1960 won the title of Academician (similar to British ‘Fellow of the Royal Society’).”

“Běhounek's interest in the sciences served him well. After studying at university he was able go on to research with Marie Curie. And who hasn't heard of Marie Curie. Plus he had some interesting scientific expedition adventures. Especially the second trip to the Arctic when the Italia crashed. Not a good place to do that. He was though, a very accomplished scientist, and went on to work for many years in various Czech institutions and also UNESCO. And... in his spare time... he wrote many books, both fiction and non. I tip my hat to František.”

And finally this answer from David Eldridge from the United Kingdom: 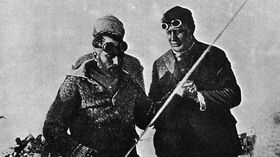 Umberto Nobile, František Běhounek (right) “Returning from the second trip the airship ‘Italia’ conveying them crashed with eight survivors, including Běhounek. They set up a survivors’ camp on an ice flow and during the seven weeks they were in the camp Běhounek continued to make measurements of natural radioactivity revealing very important data. He may have felt at home there since his father’s profession in Prague was an ‘ice man’.”

Thank you all very much for taking part in our quiz and here is the name of the lucky listener who can soon expect a parcel from Radio Prague. He is

Richard Howard from Great Britain. Congratulations! And here is a new opportunity if you weren’t lucky this time.

In March we are looking for the name of the inventor of the printing method of lithography who was born in Prague in 1771.

Please send us his name by the end of March. The address for your answers, reception reports, queries, comments and complaints is english@radio.cz or Radio Prague, 12099 Prague. Mailbox will be back on March 19. Until then, stay with us if you can.