Hello and welcome to Mailbox. Another month has passed, which means it’s time to answer July’s mystery man quiz and quote from your correct answers.

Chun-Quan Meng from China was the first to write in:

“The mystery person for July is Saint John Neumann, the fourth Bishop of Philadelphia. John Neumann was born on 28th March 1811 at Prachatice, Bohemia (modern-day Czech Republic) and died on 5th January 1860 in Philadelphia, Pennsylvania, United States. He was canonized by Pope Paul VI on June 19th 1977.” 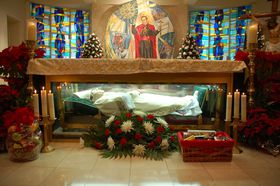 National Shrine of St. John Neumann in Philadelpia (Foto: www.wikimedia.org) “The name of the 19th century Czech-born American missionary and bishop who was canonized in 1977 is John Nepomucene Neumann. He was the first American bishop to be canonized. When he was young, he was an altar boy. He died of a stroke on January 5, 1860. He was beatified in 1963 and canonized on June 19, 1977.”

S. J. Agboola from Nigeria sent us this:

“Though his life span was short (less than 49 years), Saint John Neumann lived an eventful life that made possible indelible impressions on the sands of time. He was able to confront all odds against his ordination and achieved ordination at the tender age of 25. Apart from being a multi-lingual virtuoso, he was a great pace-setter in [a number of] regards… This was despite the fact that his bishopric was at the time of stiff opposition from an anti-Catholic political party, the Know Nothings.” 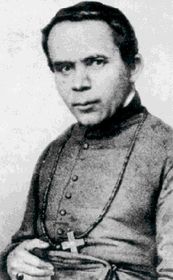 Saint John Neumann Patsy Libby writes from the US:

“I am delighted to be able to answer this mystery about a saint who is a great favorite of mine: St. John Neumann… He studied in Prague and then came to the United States where he was ordained and did missionary work in New York.

“At the age of 41, he was made bishop of Philadelphia. He emphasized education, organizing the parochial schools into a diocesan system and increased the student population as well as attracting religious orders to teach in the schools. He was known for his holiness, his humility, his dedication to serving immigrants, even hearing confessions in several different languages, and his care for the sick.

“He was the right man in the right place, when he came to the USA. He was a so called ‘entrepreneur’. He built schools, churches and other church-related buildings, and filled them with life.”

“I think your July mystery man is Saint John Nepomucene Neumann who became the fourth bishop of Philadelphia and he was the first American bishop to be canonized. He was also the founder of the Catholic diocesan school system.” “John Neumann, or Jan Neumann in Czech, was born in Prachatice, Bohemia and attended school in České Budějovice. He participated in religious life at an early age and as a seminarian he studied astronomy, botany, and theology. In 1833 he transfered to Charles Ferdinand University at Prague where he continued to study theology.

“Neumann was unable to become a priest in Bohemia on completing his study in the University as there was already a plethora of priests in the region so he first moved to Germany to find an opportunity there. He was unsuccessful there too as a similar situation to Bohemia existed in Germany with an over-supply of priests. John Neumann is then reputed to have walked to the west coast of France from where he sailed to America. 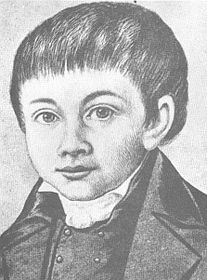 John Nepomucene Neumann in the age of ten “A quote from John Neumann is: ‘A man must always be ready, for death comes when and where God wills it.’ For John Neumann that time came on 5th January, 1860 at the age of 48 when he died of a stroke whilst running errands in a city street in Philadelphia, Pennsylvania.”

“Soon after reaching New York in 1836 Jan was ordained as a priest and was travelling on horseback, by boat and on foot through rough countryside to visit his scattered flock of new settlers…

“When the bishop of Philadelphia died, Jan Neumann was nominated by the bishop of Baltimore for the vacant post and he took office on 28th of March 1852, his 41st birthday.

Statue of Saint John Neumann in Washington “On 19 June, 1977, Jan Neumann was canonized as a saint. The celebration in his home town of Prachatice was restricted by the Communist authorities who placed road barriers across roads leading to Prachatice and organised an outing for the children to take them out of town for the day. However, the United States Ambassador was able to get through the barriers to the ceremony. Of course, since 1990 Prachatice has freely celebrated the canonization of their favourite son and saint.”

And finally this answer from Charles Konecny from the US:

“He was a priest who had a great love for the Church and its people, and that did not change after he became bishop. He had many accomplishments, but one of his great legacies was that he was a founder of the Catholic diocesan school system in this country which is one of the finest educational systems to be found anywhere. It is indeed fortunate for the Catholics, and the Catholic Church in America, that St. John Neumann left the Czech lands to be ordained in this country.”

Many thanks to all of you who took the time to research the question and sent in your answers and congratulations to Victor Mumba Ndzai from Kenya who is the lucky winner this month. A Radio Prague parcel will be mailed to Kenya first thing on Monday morning. Our little quiz continues so here is another chance if you haven’t been lucky this time. 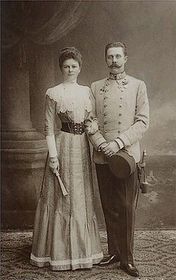 Sophie Chotek and Archduke Franz Ferdinand Regular listeners may remember that our mystery lady more than two years ago was Sophie Chotek, the wife of Archduke Franz Ferdinand, who along with her husband perished in the Sarajevo assassination in 1914. The couple were shot while sitting in a car. There was another person of Czech origin in the car and he is our mystery man for this month.

Please send us his name to english@radio.cz or Radio Prague, 12099 Prague by the end of August. There will be a Radio Prague goodie bag for the lucky listener whose name will be picked out of the hat. In the meantime keep your letters coming and Mailbox will be back again next week. Take care. 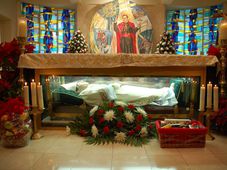 A humble man born in South Bohemia later became one of the first saints in the United States. John Neumann actually studied for the…

The celebrations of the 200th anniversary of the birth of St John Neumann, a Czech born missionary to the United States and the fourth…