In Magazine: a chink in the armour of the Czech military, a forty-metre-tall brick chimney in bloom, a Czech town holds its annual bread-baking celebration and forget about exotic breeds “adopt” a bench on Wenceslas Square! 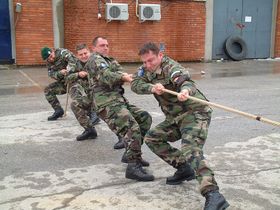 Photo: Archive of Radio Prague Czech Radio carried a quaint news story last week, reporting that 150 Czech soldiers saw their shoes fall apart during training exercises. At a time of cutting edge-military-technology, the troops were forced to bind their footwear with tape every morning and cut through it every evening in order to take their shoes off. “The heels just came off after 3 days, it was really unbelievable – and we weren’t doing anything out of the ordinary – just regular training in the field” one of the soldiers told Czech Radio. The story had people cracking jokes on social networks about the action-readiness of the Czech army. An additional piece of information that aroused great mirth was an official statement from the military saying the shoes would be replaced within a month. Well, let’s hope our boys don’t have to go to war before then! 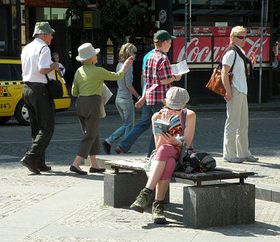 Photo: Archive of Radio Prague In addition to adopting animals at Prague Zoo, the city’s inhabitants can now consider adopting one of the benches on Wenceslas Square. This unusual offer comes from the Sdružení Nového města NGO which was appalled by the state of the benches on the town’s main square and set about fixing them. Over a third of the 80 benches have been given a facelift – with new planks bearing verses in Czech and English. The NGO now wants to give the public the opportunity to support a worthy cause and adopt a bench of their choice. The adoption of one bench costs 7,350 crowns and the “adoptive parent” will have his or her name on it and will be able to pick the verses inscribed. The report does not say whether the “adoptive parent” will have a permanent reservation as well. Photo: Jan Harant A forty-metre-tall brick chimney is in bloom in Česká Skalice and has become the most photographed object in town. The chimney is ablaze with flowers with 33 rings of white and red geraniums towering above the town. The idea to dress up the chimney in a bright gown of 1,420 plants came from the local garden centre as an effective bit of PR –proof that you can grow plants almost anywhere. The centre first decorated the chimney last year and the idea proved such a hit that the centre decided to stick with it. The plants, placed in 355 containers, get water and fertilizer through a long hose leading to the top and bloom throughout the gardening season.

A collection of life-size wooden animal statues is to grace the third zone of the Krkonoše National Park. According to Krkonoše National Park spokesman Radek Drahý, the EU-supported project aims to bring more visitors to the highest mountain range in the Czech Republic The statues of 14 animal species will be placed at different locations along a tourist track from the Moravian Cabin to the Czech-Polish border, Drahý said, adding that the first to appear this week was the statue of a deer. The statues, made of oak, represent the wild animal species living in the mountains, such as roe-deer, badger and fox as well as grouse, woodcock and viper. Along with the statues, the park’s management will also place information panels to highlight the presence of the animals along the track. 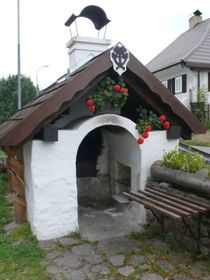 Public bread oven in Lenora, photo: Romana Kostohryzová, ČRo The town of Lenory in the Šumava Mountains held its annual bread-baking celebration last weekend. The town is famous for its bread baking tradition and still has a functioning public bread oven dating back to 1837. The public oven was for poor families who could not afford an oven in their home. Several families would bake their bread in the public oven at the same time in order to save on coal and firewood. The town had several public ovens but only the one from 1837 remains functional and is now a cultural monument. The decision to revive the town’s bread baking tradition was made 17 years ago and the annual celebrations date back nine years. Augustin Sobotovič who bakes bread in the public oven in traditional style –not just for the annual celebrations but on one Saturday every month says there are many secrets to producing a good loaf – a good mother dough, a great oven and not letting the dough catch cold. Hundreds of people turn up to watch him making hand-made bread, rolls and garlic bread snacks for the celebrations. The gathering of the Czechs and Slovaks in Velká Javorina, photo: Chamber of Deputies of the Czech Parliament Czechoslovakia broke up twelve years ago but, in their hearts and minds, they are refusing to accept it. The generation of Czechoslovaks, whose homeland no longer exists, say the division of the two counties was a mistake and for sentimental reasons they get together every year to celebrate Czecho-Slovak brotherhood high up in the White Carpathian Mountains. Several thousand Czechs and Slovaks gathered in Velká Javorina last weekend for their annual get together, meeting to chat, enjoy live music, eat good food and reaffirm their special relationship. “The Czechs and Slovaks were always close –we can’t see what good the break-up brought us” Antonín Zmačník, the former mayor of the small border town of Straní told the ctk. The organizer of this year’s celebrations Martin Benatinský thinks alike “I think we are closer than before. It is like with siblings, they quarrel when growing up and then when they go their separate ways they care about each other all the more”. The idea to organize these annual celebrations of Czechoslovaks emerged in 1992 –in protest against the imminent break-up – and, contrary to expectations, the number of people attending them to celebrate their common legacy has not dwindled.