Visitors to Prague will soon get another chance to view the Czech coronation jewels. A 19-year old Czech girl has won the Czech speed beer drinking contest. The first-ever specialized mushroom store is to open in Prague. Find out more in Magazine with Daniela Lazarova.

Ever since the fall of communism, almost two decades ago, the Interior Ministry has been striving to improve the image of the police force. Not an easy task after close to half a century in which the police were feared, hated and ridiculed. Within the image-building campaign the police got new uniforms, new cars, a new name and lots of training in being friendly and helpful to citizens. The slogan on their new cars reads “we are here to help and protect” and that is also the message used in ads to recruit new officers. But sometimes it’s the small things that make a big difference. An officer in Brno has gained instant popularity after he helped save two baby squirrels and is now giving them substitute mother-care around-the-clock, feeding them a special baby formula every three hours. The squirrels have been given names and accompany the officer on his daily beat, hiding inside his police jacket for warmth and peeping out of his sleeves. While his colleagues crack jokes about it, kids look out for him every day stopping to chat and begging for a glimpse of the two police mascots. There’s not much more that officer Pavel Antonín needs to do to elicit trust. 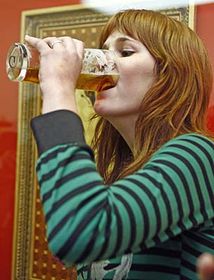 Olina Čunátová, photo: CTK Czech beer-lovers often race each other to see who can down a glass of beer faster. And they spend hours at the pub practicing. But recently their nose was put out of joint by an attractive 19-year old red-head. Olina Čunátová has the look of a model and when she entered the national speed-drinking contest some men in the audience sniggered. But their jaws dropped when Olina picked up her frothy half-liter and poured it down her throat before the others had taken a few gulps. She downed her glass in three seconds. Now she’s aiming to beat the Slovak record-holder Juraj Čizmar who can down a liter in 2,7 seconds flat. 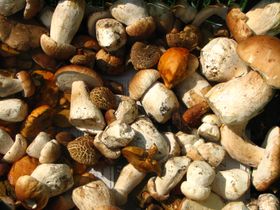 Given the enormous popularity of mushroom picking in the Czech Republic it is surprising that there is not a single store specializing in mushrooms in the country. However that is about to change. Prague will soon have its very first mushroom store which should sell mushrooms from around the world, as well as offering expert advice on how to grow mushrooms and how to consume them. Not that Czechs need a great deal of advice in that department. Even children in this country can tell most edible mushrooms from poisonous ones and recipes abound. Thousands of books and encyclopedias have been written on the subject and every spring autumn and summer millions of Czechs set out for the country’s forests to pick mushrooms, a portion of which are always pickled and dried for the winter months. However what this new mushroom store will feature is varieties which are not found in this part of the world, for instance mushrooms from Asia. At present Czechs’ knowledge of Asian mushrooms is generally restricted to the “shitake” mushroom of which Czechs buy 250 kilograms a week! Japanese experts have found that it has a cleansing and tonifying effect on the human body and is said to have been widely used in the wake of the Hiroshima disaster. The Prague store will also offer mushrooms as medicine – including a so-called mushroom-quartet elixir – extracts of four mushrooms which reportedly make a powerful health tonic for people who are under extreme stress or recovering from a serious illness. Sadly, the store’s address is wrong – although there are ten streets named after mushrooms in Prague, the new store will be located on Camomile street.

Times are changing for the Zetor company in Brno which produces tractors. It now has a Japanese management which aims to introduce the Japanese work philosophy in the factory – including ten minute exercise sessions every few hours, English lessons for all factory employees and even sushi in the canteen. The factory’s Czech employees are looking somewhat bewildered by all the changes and it remains to be seen how the mostly-male staff used to roast pork, sauerkraut and dumplings will take to sushi for lunch! An opinion survey conducted in fourteen capital cities around the world by the agency Ipsos suggests that what the inhabitants of Prague appreciate most about living in a big city is the sense of freedom it gives them. Seventy-six percent of respondents said the had made a home in Prague because it is easy meeting new people and 87 percent said they chose to live in Prague because it has the highest average salary in the country. The inhabitants of Prague are also more than usually optimistic for big-city dwellers – only 31 percent of them said they ever suffered from loneliness or minded the anonymity of city-life – which are frequent complaints from big-city dwellers elsewhere. 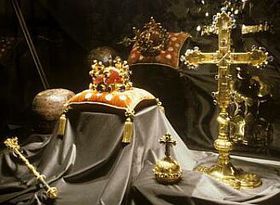 Visitors to Prague will soon get another chance to view the Czech coronation jewels – the St. Wenceslas crown of Charles IV (1347), the Royal Sceptre ( from the first half of the 16th century) The Royal Orb (first half of 16th century) and the Coronation Vestments (beginning of 17th century). The jewels are to be exhibited on the occasion of the 90th anniversary of the founding of Czechoslovakia. Even the process of bringing them to light is veiled with excitement and mystery. The coronation jewels are kept locked in the Crown Chamber in St Vitus’ Cathedral. The only possible entrance to the chamber is through a tiny metal door in the south-west corner of the Chapel of St Wenceslas. Behind the door is a metal safe in which the jewels are deposited. Both the door and safe are locked with seven keys and can only be opened if the seven persons entrusted with a key to this national treasure get together. They are the president, the prime minister, the Prague archbishop, the speaker of the lower house, the speaker of the Senate, the dean of the Metropolitan Chapter of St Vitus Cathedral and the mayor of Prague. These gentlemen will assemble at St. Vitus Cathedral next week to bring the coronation jewels to light for an exhibition which is to last from April 19th to April 29th. Every time this happens people cue up to see them, because there are not many opportunities in a lifetime to do that. In the course of the twentieth century the Czech coronation jewels were shown to the public only nine times. So if you are listening to us in Prague – don’t miss the opportunity.