A Czech wants to bike down Mount Kilimanjaro! 101 things to do with marihuana - why not build a house with it? And, the largest equestrian statue in the world looks over Prague. Do you know who is on it? Find out more in Magazine with Daniela Lazarova.

Petr Zacek is celebrating. For years he has risked going to prison in order to build his dream house but now he is safe. A recent ruling by the country's Supreme Court which said it was not illegal to grow marihuana - will allow Petr to build his marihuana house without fear of getting arrested. Petr uses his own building materials - growing technical marihuana on a small field - drying it and weaving it together to make the walls and roof of his house. He says that marihuana is not only a highly ecological building material - it is energy-saving as well. Although he uses technical marihuana which is unsuitable for drug use he has been in trouble with the authorities over his building material. 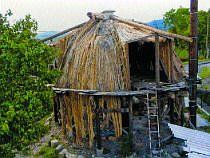 The police have been keeping a close eye on him and recently one of the tests on his marihuana plants revealed a slightly higher level of THC than permissible. Petr Zacek got a suspended sentence - which meant that even a small transgression would land him in prison. But he wasn't giving up on his dream house and he went on building it with every new harvest from his little field. Now he knows he can finish it and show it off to reporters without fear of reprisals. It is not likely to set a fashion but for Petr Zacek finishing his unusual house is now the most important thing in the world. 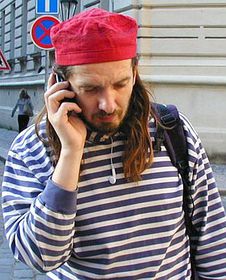 When did you last check the ringing tone on your mobile phone? Fashion-conscious Czechs are obsessed with having the latest melody and there's plenty to choose from. Unbelievably we are now being told that your mobile melody will not only let others know what kind of person you are - but you can also use it to attract the opposite sex, like pheromone perfumes, if you believe that sort of thing, of course. A certain internet page from which you can download the ringing tones say they guarantee that with their phero-tone you can get a partner within an hour - just get someone to ring you a few times while you hang around your chosen target. The melodies will allegedly stir that part of the brain which has to do with sexual attraction and sexual appetite - so expect the guy to throw himself at you within the next ten minutes. I should add that the phero-ringing-tones differ for men and women - so be careful with lending and borrowing. Good luck - and do be careful who you stand next to when expecting a call - that kind of thing could be extremely dangerous!

Forty-three year old Czech globetrotter Petr Jahoda is the only man in the world to have biked down from the top of Mount Kenya. He did it three times using a specially constructed mountain bike and this year he set his heart on conquering Mount Kilimanjaro. He practiced for months in a deep stone quarry here in the Czech Republic and when he was finally there and his goal seemed just within reach - he was in for a big disappointment. One of the National Park keepers confiscated his bike because he had omitted to get a special permit for his Kilimanjaro bike ride. So - being there - he at least skied down the mountain. But it wasn't what he had intended and he can't wait to get back - armed with the required permit. 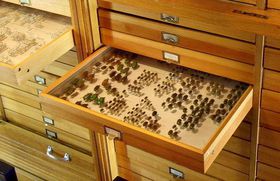 Photo: Richard Meyer, CC BY 3.0 Unported Bugs and beetles - in some countries they are considered a special delicacy, elsewhere a staple diet, but Czechs love collecting them. "On the world entomology ladder we are a superpower," says Vladislav Maly, a leading Czech entomologist. Thousands of Czechs are said to be avid collectors, planning their holidays with respect to new beetle hunting grounds, and returning home with thousands of new specimen for their collections. Going on holiday with these beetle enthusiasts is not great fun - "On a good trip I come back with around ten thousand beetles in my rucksack," Vladislav Maly says " many come out at night and on a good night, with a bit of luck, you can capture around a thousand bugs and beetles". Although his wife and children could be forgiven for making their own holiday plans there can never be too many collectors like him. Entomologists estimate that only around a third of all insects species still living on planet Earth have been registered. And due to logging in the Amazon rainforests hundreds of them become extinct every year. People like Vladislav Maly help to map the great diversity of insects before it is too late. 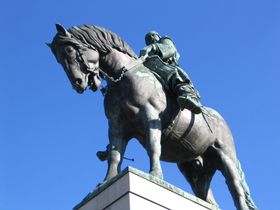 Did you know that the Czech Republic is said to have the largest equestrian statue in the world? And no - it is not the one of St. Wenceslas on the upper end of Wenceslas Square. The statue in question stands on Vitkov hill and represents the fearless 14th century Hussite warrior Jan Zizka. Zizka's army was made up largely of simple peasants and townspeople untrained in arms - but what they lacked in training Zizka made up for in military genius. His brazen ingenuity and raw patriotic courage made his armies invincible as they marched into battle singing "Ye who are the soldiers of God". In the course of 14 years Zizka repulsed five anti-Hussite crusades led by the Holy Roman Emperor Sigismund. 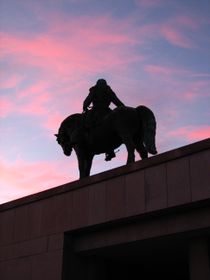 Among Zizka's military innovations was the use of armoured farm wagons equipped with canons that could be continually fired while charging enemy lines. When on the defensive the wagons would form a circle to protect foot soldiers within it and fire on the enemy without. In this way Zizka anticipated modern tank warfare by nearly 500 years. Zizka died of the plague while leading his army into battle in 1424. And it is said that his dying wish was to have his skin made into drums so that he might lead his troops into battle even after his death. Today Prague's Zizkov district - is named after the one-eyed warrior and his statue, standing over nine meters tall on Vitkov Hill, is billed as the largest equestrian statue in the world.