What's in a name?

The other day I got a text message on my mobile phone from Czech friends, to let us know that they had become proud parents of a healthy little girl, weighing in at 3320 grammes. They added that they'd decided to called her Madrun, who, they explained, was a medieval Welsh saint. Well, I'd never heard of her, but I certainly agreed that it was a pretty name.

The next day our friend Dana got in touch with us again. 'The authorities won't allow the name,' she explained. 'Is there anything you can do to help?' After a quick search on the Internet I found 3,220 references to Saint Madrun - almost as many as the number of grammes making up the weight of the saint's latterday namesake. Sources, including several in Welsh, confirmed that Madrun - also known rather less prettily as Matriana or even Matron - hailed from what is today the Welsh county of Monmouthshire way back in the 5th century, and had also, so legend has it, lived in Cornwall. I also discovered that there are two Cornish churches dedicated to her, although the achievements that earned her sanctity remain veiled in the obscurity of the Dark Ages.

I phoned Dana with the good news - only to hear her bad news. She too had already surfed the Web, but had been informed that the Internet was not an adequate source, whoever the author may be. Dana was told that there was only one person in the Czech Republic entitled to approve names not on the official Czech-list, if you'll forgive the pun. She is a lady in her 80s, who most definitely - and perhaps not entirely unwisely - does not approve of new-fangled electronic methods of information-gathering.

While Dana checked up on the law and found that - yes - this woman really was the Czech oracle when it came to approving names, I decided to contact the rector of the little Anglican Church of Saint Madrun in the depths of rural Cornwall. She immediately got back to me - congratulating my friends on choosing such a lovely name, and confirming that her church really was dedicated to the Celtic saint. She also had a good tip for us. She had a quick look in her 1982 edition of the Oxford Dictionary of Saints, and confirmed that there was a reference to Madrun.

So all we needed to do now was to get hold of a copy to present proudly to the lady of the names. I contacted an Anglican priest living here in Prague, but he replied with just a hint of scorn that he didn't have the book, that hagiography was not his cup of tea and that there were rather a lot of dubious Cornish saints.

In the end it was once again the Internet that came to the rescue. Dana and her husband Jakub have now ordered a copy of the Dictionary of Saints on the Web, and hopefully it's now on its way to them. 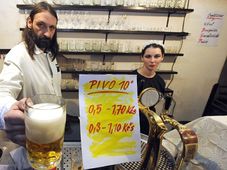 Can you no longer remember what life was like under communism? A pub in Prague 3 offers the authentic experience – grubby walls, soiled tablecloths… 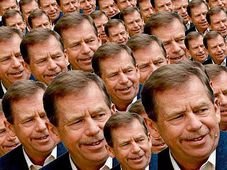 It’s the thief’s turn to cook dinner! Why are so many tourists spending hours in a certain public toilet. And, how many men in the…