To mark the four hundred year anniversary of the publishing of the Kralice bible, the first to be published in the Czech language; an exhibition documenting the creation and history of the seminal literary work is taking place at the Prague’s Clementinum at the moment. 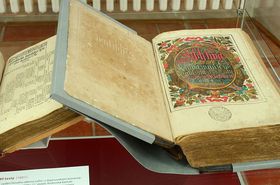 Kralice bible, photo: archive of National Library Significantly, the Bible is regarded as both a cornerstone of the development of the Czech language and one of the first major cultural achievements of the Czech spirit in the early modern period.

However, any talk of religious significance is absent. No prizes for guessing why. According to the 2011 census, almost 80 percent of Czechs identified themselves as non religious or undeclared, making the Czech people among the most secular on God’s earth.

While it’s undeniable that the ideological toing and froing of the 20th century contributed to the secular character of the Republic, the roots of this secularism can be traced back much farther – to this very Bible, it could be argued.

The mastermind behind and the chief translator of the New Testament of the Kralice Bible, Jan Blahoslav, was undoubtedly a closet secularist. He masqueraded as a member of the Unity of Brethren, an ominous sounding religious clan adhering to the principles of the Hussite protestant reformation that swept the Holy Roman Empire in the Fifteenth and Sixteenth Centuries. However, he was, above all else, a humanist who undertook the translation of the Bible from the original Hebrew and Greek with a distinct lack of religious sentiment. 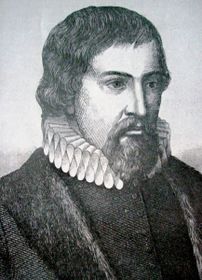 Jan Blahoslav Blahoslav was reviled by his peers in the Unity of Brethren because of his scientific approach to the study of theology. He compares, in this sense, to other philologers of the era – Descartes and Galileo, for example – who questioned and sought to categorise subjective experience.

Although he died before the Bible was completed, the students he had sent abroad to study linguistics in Basel and most significantly in Wittenberg, the city in which the German Luther bible had been translated some half a century before, returned to finish his work. After 15 years, in 1594, the Bible was completed; its grammar, interestingly, based upon the principles of another of Blahoslav’s previous works, Gramatika Česká. The price of the Bible was roughly equivalent to two barrels of beer or five sheep, thus making it available to most parish budgets.

Whereas the English language equivalent of the Kralice Bible, the King James Bible, was completed by religious scholars within the Church of England, a similar religious conviction was all but absent from the Czech translators. With such secular origins, it seems almost prophetic that the Czech nation would go further down the path towards non religiousness.

That's not to say, however, that this version of the Good Book holds no relevance.

After a long period spent in dissidence due to the defeat of the Protestant Bohemian lands at the battle of White Mountain in 1620, the Bible reappeared at the forefront of the Czech nationalist revival in the 19th century. Interestingly, it was the language of the Bible that came to be utilised as the basis for the renewed form of the Czech language in the creation of a national consciousness. 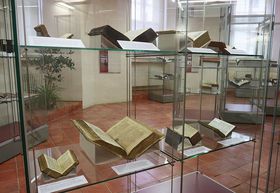 In this sense, the Bible can be categorized with the churches, cathedrals, and religious artefacts around Prague and the Czech Republic. Religiously obsolete for the majority, yet providing a rich cultural tapestry out of which a very strong national consciousness was born. Czech bishops have criticized a new translation of the Bible that came out last week. Entitled the Bible – a 21st century translation,… This year’s Easter has been very special for Christians in the Czech Republic as, for the first time in 30 years, they could read…