Until the advent of the First World War, intellectuals and artists sitting in Prague’s smoky coffee houses would have talked in ‘isms’: modernism, cubism, futurism, and realism- just as did they in Paris, Vienna and other cultural hubs around Europe. These artistic movements of the early Twentieth Century celebrated the wonder of contemporary progress, the speed of its technological advance and the power of the machine. 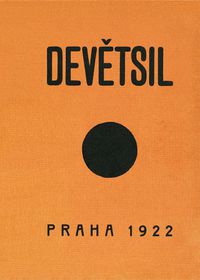 However, the devastation caused in the First World War was stark proof that the ‘isms’ of late belonged to the old social order of Europe. In rejection of the old order, several artistic movements came into existence such as the Dada movement in Zürich, the Neue Sachlichkeit in Berlin and De Stijl in Amsterdam. It was, however, the Devětsil movement in Czechoslovakia that was one of the first of such movements to offer a genuine socially progressive manifesto linking the arts and its purpose in society.

Officially founded in Prague in 1920 with the unveiling of the Devětsil Manifesto, the movement lies largely forgotten in the annals of history; which is somewhat surprising considering the fame of several members of the group. Notable members included the writer Vítěslav Nezval, Kafka’s lover, translator and critical journalist Milena Jesenská and the abstract photographer Jaroslav Rössler.

Inspired by the experiments of the Dadaists’ yet intent on having a positive impact on their newly formed Czechoslovak republic; the group of young artists, writers, architects and playwrights sought to move away from the pre-war bourgeois direction of the ‘isms’ by focusing on the simplistic beauty of everyday objects. “The most beautiful paintings in existence today”, wrote theoretisict Karel Teige “Are the ones not created by anybody”.

This ideal was thus meant to appeal to the working classes of Czechoslovakia. In the manifesto of 1920, written by Karel Teige and Jaroslav Seifert, it was proclaimed that the greatest mistake of the past was to “believe that the art of the machine was the art of the worker, who, on the contrary, is imprisoned among monster machines and devastated by them”.

The movement flourished in Prague and to a lesser extent in Brno during the 1920s. A varied programme of public art lectures, poetry evenings, theatre performances and countless literary collections in magazines such as Život and the Devětsil revolutionary anthology represented the movement. It must have been an exciting time to live in Prague, for there was genuine belief among the artists associated with the movement that they could have a positive impact on the development of the young Czechoslovakia.

Almost one hundred years on, Prague is still the bustling cultural hub that it always was. The romantic idea that a collection of unified artistic ideals could have a positive effect on society at large is, however, long since forgotten. When the market mechanism enjoyed an open armed reception in Czechoslovakia after the revolution of 1989, the focus shifted more than ever onto individual success, the new yardstick by which almost everything is measured. Perhaps that’s also why Devětsil as a movement is not celebrated. Its individual talents on the other hand, are.