The Colorado potato beetle is a pernicious and resilient crop pest. Also known by the colourful name of ten-striped spearman, it has an interesting history in this part of the world. In fact, the beetle was one of the most visible elements of communist propaganda in Czechoslovakia in the dark days of the 1950s.

Today Europe is successful in keeping the Colorado beetle at bay, but it was a different story in the first half of the last century. Around the end of the first world war the scourge of the spud was discovered in France, from where it began steadily spreading to other countries. There were fears it would reach Bohemian and Moravia during the Nazi occupation, though it was not until 1947 that it actually arrived.

It was in the early 1950s, however, that there was an explosion of the Colorado beetle population in Czechoslovakia. It was quickly to become an important element of communist propaganda in that hard-line era, according to a recent piece in a journal produced by Institute for the Study of Totalitarian Regimes.

With the most intense outbreaks occurring in areas bordering the West, the government claimed the destructive insect was being sent into the country by capitalists and imperialists with the aim of undermining the Czechoslovak economy.

As to how, different explanations were offered: they were being launched into the air and carried by the wind, dropped from planes, or carried into the country in jars and bottles by enemy agents. To reinforce this claim, the bug was renamed the American beetle.

(This, by the way, echoed an earlier Nazi claim that the US Air Force was dropping potato-destroying beetles over Germany).

A special, Soviet-advised committee was set up to fight what was described as the latest criminal instrument of American barbarism. Thousands of hledačky (searchers) were sent out into the fields to repel the enemy attack.

Taking part in the campaign should be an honour for every citizen, said the communists. Propaganda posters appeared. One featured a beetle wearing an American-style hat and a parachute. Another, appallingly, read “We’ve dealt with Horáková, we’ll deal with the American beetle”, Horáková being Milada Horáková, who was executed in a notorious show trial. 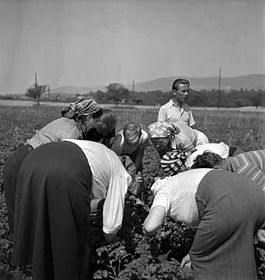 Photo: CTK Television propaganda “news” showed a miniature map with a swarm of American beetles crossing the border, and diligent citizens tirelessly exterminating them. By the way, if you want to see this footage for yourself, search for “mandelinka bramborova” on YouTube.

Some of the hledačky were factory workers, though most were children and they were a particular target of propaganda. A special episode of Ferda Mravenec (Ferda the Ant) was created, in which the popular cartoon figure fights the American beetle. Ferda delivers the bugs to children who kill them in a jar of kerosene and sing a line about the bugs having fallen “under the flag of their masters”.

Times change, however; with the relative thaw of the 1960s the insect’s name was changed back from American beetle to Colorado potato beetle.