A wave of retro 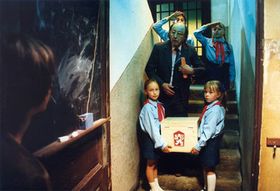 Pupendo Fourteen years after the fall of communism Czech audiences are enjoying a wave of retro. Films, TV series and pop music shows dating back to the communist 80s have found new favour. Can Czechs possibly be nostalgic for a time when they queued up to buy such basic things as bananas and toilet paper and were afraid to speak their minds in public? Sociologists who have been called upon to explain this unexpected phenomenon say that it is perfectly natural, something they call retro-optimism.

People remember the good times in their own lives - falling in love, getting married and having children -and surmounting all the hurdles that life placed in their way. Although much of it was frustrating and Kafkaesque - it was their life. Today people like to look back on the absurdities of the past and they find a great deal to relate to. 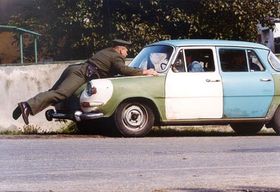 Pupendo Film makers have been tapping this potential since the fall of the Iron Curtain - producing wry comedies about life before the Velvet Revolution. First it was the Oscar winning Kolya, then Cosy Dens and currently Pupendo - all big hits with the public. And this is not just a Czech phenomenon -one of the hits at this year's Karlovy Vary Film Festival was the German film Goodbye Lenin -a German comedy about two siblings who try to recreate East Germany in their living room for the benefit of their mother who has been in a coma following an accident and knows nothing about the fall of the Iron Curtain. Czechs gave the film a standing ovation - and there were outbursts of laughter as people recalled the former neighbouring communist state where they had so often undertaken shopping expeditions in order to buy "something different". Another very popular side event at the Karlovy Vary Film Festival was a five hour music marathon promising the very worst that the communist music scene had to offer. The place was packed. Who would have thought that one day the drab communist scene would bring enjoyment and make money!