The guerrilla art group Ztohoven, known for their controversial projects and often operating in anonymity, have made a somewhat surprising move. At the end of last year, they opened an official institution, a so-called institute of crypto-anarchy. Situated in a former factory building in Holešovice, the Paralelní Polis or parallel world will serve as a hacker space, a hub and a bitcoin café. According to its founders, it will offer the public a possibility to “step out of the system” 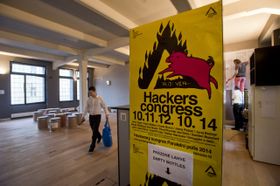 Paralelní Polis, photo: CTK The Ztohoven group is known for frequently coming into conflict with the law. The artists first made their mark about a decade ago, when they transformed a huge neon heart on Prague castle into a question mark. A few years later, one of their members was imprisoned after tampering with traffic lights in Prague and changing the traditional red and green signs with figures with in various striking or lewd poses. But they became best known for hacking into a live television broadcast with images of a hoax nuclear explosion. Most recently, they sparked controversy with an exhibition which invited the visitors to send text messages to politicians from an untraceable phone.

When I met with the group’s spokesman, passing under the pseudonym Petr Žílka, I asked him how the idea of establishing an institute emerged:

“It has been about four years since we started to cooperate with the hackers. This cooperation seemed to be beneficial for both sides and we became really fascinated by all the possibilities the hackers brought to our group. They also became regular members.

“For the last two or three years they have been pushing us to establish a new hacker space in Prague, which would focus on social and political issues. We were considering where and how, and then we found an absolutely amazing house and we started to consider establishing something more than a hacker space, a social institution. And finally, here it is, it is called Parallel Polis.”

Why did you chose this title, a term coined by philosopher and late Charter 77 signatory? Why have you chosen this title?

“We regard ourselves as Havel’s teenagers. That’s a kind of shortcut to express our feelings about our generation. 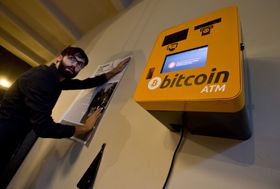 Paralelní Polis, photo: CTK “Václav Benda brought this absolutely unique idea, called Parallel Polis, derived from the movement of Charter 77, which describes what really happened in the society in the 1970s and 80s.

“What was growing here was a new parallel society, which had some basic pillars, such as independent education or freedom of speech, which was officially regulated, and they had disseminated information by samizdat.

“This idea was grown during communism, but for us it is more general. We feel it’s a universal concept that we can bring to contemporary times, because nowadays, we can see many authoritarian tendencies.”

Do you mean to suggest that there is a parallel between our current situation and the situation then?

“The situation is totally different. We live in a completely different society. But we solve similar problems. If you look at what is happening on the internet, the freedom is endangered by the state and corporation who try to limit the content.

“They criticize open government movements, such as Wiki Leaks and their whistle-blowers. So the problems are similar although the technological means are totally different and the wave of the authoritarian tendencies doesn’t come from the East, but from the West.”

How exactly are you going to do that?

“The idea is to create an absolutely independent space dedicated to people who search another way to use and apply modern technologies, which is a strong tool for social change. 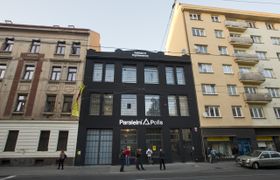 Paralelní Polis, photo: CTK “Nowadays many technologies that originally came from hackers are part of life and we use it. We want to show that there are ways how to get rid of all the regulations and enjoy your virtual freedoms, encryption and anonymization programmes, for instance Tor, used by press or activists.

“We call it crypto-anarchy because it allows you to have anonymous relationships with whoever in the world and all the rules depend on you.”

“In the 60s and 70s the hackers were seen as something absolutely positive. The word “hack” stood for a technological improvement that allowed a better functioning and so on. But given the media attention especially to the evil hackers, it has a negative connotation. But the hacker scene is much wider.”

We are talking about a hacker space, but as far as I know, your institution is going to offer more than that.

“We want to create a living organism, a parallel structure that would allow people to step out from the system we are living in as much as possible. That’s why we also established a café, and a library and a co-working space where you can hire a table and can do your business. And there is also a “maker space”, which is an experimental space where you can experiment with different technologies, such as 3D printer or a laser cut.

“The house is an example of how it could work. We have closed economies based on crypto currencies. We will not be accepting fiat money. This way we want to show that you can really start living like that and minimalize the influence of state and laws.” 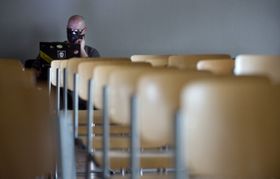 Paralelní Polis, photo: CTK If I want to come to your institution and I don’t have any bitcoins, can I still come?

“We regard ourselves as an embassy of crypto-anarchy. We will provide service. We will show ways how to start. For example yesterday we received a paper wallet printer, which allows you to make bitcoin transaction without any smart technology. Even if you don’t have a smart phone, a computer or an iPad, you just need this piece of paper. So when you come, it doesn’t matter that you don’t have any bitcoins and no experience, we will show you everything.

The tile “Paralelní polis” or parallel world suggests that you don’t want to be dependent on the state. But at the same time you need funds to run your institution. How are you going to solve this problem?

“Our principle is that we are state free, so we don’t accept any grants. So we were searching how to finance it, because it is very costly. We have to pay the rent and energies and so on.

“I have brought the idea of Board of Directors from American NGOs. People with good reputation, and they have some spare money and they want to support the project with their experience. And they pay membership. And the principle is that the amount is equal for everybody.”

Do they have any decisive power?

“We decided not to follow the idea of directors because they have executive rights, so we call it Board of Partners. They can give advice but they cannot decide about financing about who is the director of the institution and so on.” 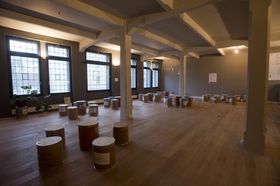 Paralelní Polis, photo: CTK “It is a natural development. The group has operated since 2003, for more than ten years. We are developing as a group and as personalities. We told ourselves that we cannot continue with the guerrilla activities.

“The institutionalization was a natural step we had to go through to articulate our ideas. But we always work with ambivalence and that’s why we established the institute of crypto-anarchy, which is ambivalent in itself.”

The episode featured today was first broadcast on October 14, 2014.