In this edition of In Focus: extreme high diver Michal Navrátil talks about his sport including his recent trademark jump at the Worlds. If you are afraid of heights, understand that the professional regularly dives from 27 metres, reaching a velocity of 90 kilometres per hour when he breaks the water. 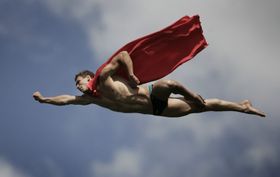 Michal Navrátil, photo: archive of Michal Navrátil In the interview I first ask Michal not about diving – we’ll get to that - but when he first began swimming, when he got used to the pool.

“I started when I was a year old, at the same time I learned to walk, because my father was a swimming teacher and all of our family, all of my brothers, started with swimming.”

So it’s fair to say that you’ve always been comfortable in the water...

“Exactly, I also attended swimming school and as a child I also trained in gymnastics and made it to quite a high level. When I was 11 I began to want to try something else and that was how I began diving. I was lucky: the gymnastics were useful and that’s how I was accepted.”

You had a good foundation, being fit and limber... what are other factors that are important when you take up a sport like diving? 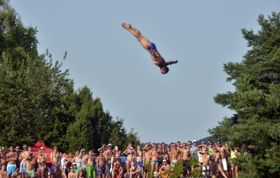 You took it to the next level: the extreme high diving... how would you describe the difference?

“Until 15 I did diving in the pool. But my friend and I gave it up because we did not think in the Czech Republic we had the capability to take on people room around the world and we didn’t want to go from defeat to defeat in competitions. So I gave it up and took some time off and enjoyed life a bit. “But a year later I took part in a competition in the Czech Republic called ‘The High Jump’ which was 12 metres. I took part and saw that it was something different. It was even scarier but the crowd reaction, the excitement, afterwards was powerful. It motivated me to begin my training again and to return to the pool to get better so I could return the next year with new skills and new tricks.” 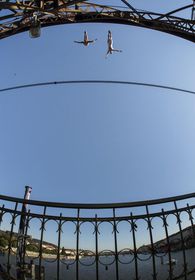 Orlando Duque and Michal Navrátil, photo: ČTKWhen you are coming up with a dive, what are elements that you can incorporate – I know that there are different kinds of twists... Also, when jumping from 27 metres, do you always land feet-first?

“I always land my dives feet-first because head-first is extremely difficult and dangerous. It is hard enough on your body to do it feet-first! That said, a few years back there was a Norwegian diver who did extreme jumps head-first in competition. He had trained for it and could handle it and wanted to try and compete against really difficult dives such as those done by Orlando Duque. But generally, no one does head-first in competition. It is too risky and too easy to get injured.

So it isn't something you would see on the tour now?

“There are countries like Slovenia or places like Acapulco that have their own competitions where locals traditionally do head-first dives from 20 metres or so. But I don’t plan from diving headfirst from 27 metres! I focus instead on other elements of the dive.” 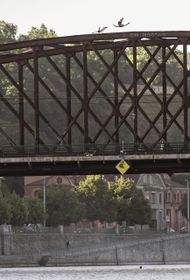 Orlando Duque and Michal Navrátil, photo: ČTK “It depends on your life-experience. At the European Championships in Switzerland I had to for the first time jump 20 metres and I had to build up to it. I waited for a year and trained and trained and prepared. Then I went back and this continued for four years. After that, I raised my personal bar to 27 metres... but even that took a while. At first, I didn’t know how to land it. I did the jump and landed it but it always hurt for days afterward. The next day I could barely walk. I had to learn how to land it.

“A key moment for me was travelling to work in a diving show in China where I trained with divers who are competitors now in the Red Bull series and the World Championships. We did three shows a day and it was up to me to prepare physically, to prepare mentally. I was determined to do it and to learn it.

“I trained between the shows and had to find the energy. It was every single day and every single day we had to a 26-metre jump. I had eight months of this... I really ate it up and it was very hard... but now I can live from it. If you get through it, you are strong for life.”

Just recently you came fourth at the FINA World Championships where you also performed a trademark dive... as the Man of Steel. Superman. How long have you been doing that dive and how did you come up with it?

“I started it when I was around 16. I did it at 12 metres. When I had gotten the hang of doing a running dive and could try and fly and so a somersault in the air, I was hanging out with some friends and somebody suggested I could do the Superman pose, with the arm extended. I thought it could work so I tried it. 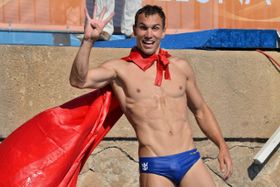 Michal Navrátil, photo: ČTK“Then I stopped doing the jump for a long time and brought it back as an extra as an out-of-competition jump at 27 metres for audiences as a way of celebrating the end of several days of competition. I do it when I feel strong. I have had the cape since Turkey, the Worlds there, and it is the same one. It is my ‘relax’ dive.”

In the video you can see your exhilaration after landing it: even after having done it so many times, it seems the adrenaline remains...

“Well, it’s the height. When I am in the air and strike the pose the first thing I think about is how far above the water I am. This dive actually did not go as well as I had hoped. I went really super-straight to try and fly a little bit but it was a bit long and threw my somersault off a little. I sort of kicked out and went into the tuck and was wondering about the water because you don’t want to land on your back. When I felt the water rushing up I tried to go as tight as possible to break through. At 27 metres every dive is really dangerous and you have to be really ‘tight’ as you break through.”

In terms of the height is 30 metres the limit physically? I am not saying anybody should go higher but can they?

“Well I was very lucky: I set my record at 30 metres just a few days ago and I didn’t feel any difference between 27 metres and 30. Maybe it was all the adrenaline but it felt the same. The impact was the same. It may even be possible to go higher than 30.”