A group of independent filmmakers and animators, headed by producer Mirek Veselý, is nearing completing of a series of animated shorts entitled Old Prague Legends. As the name suggests, the series focuses on some of the city’s oldest tales, either famous or almost forgotten. 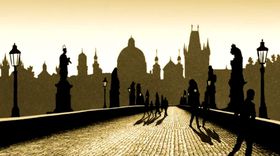 'The Innocent Child from Charles Bridge', photo: website of the project The best part? The team uses simple but very effective techniques you can see for yourself online. Bára Zychová is the project’s PR Manager, she told me more about Old Prague Legends this week.

“We all know that some parts of history become forgotten and that is also true of legends. Some legends remain very well-known but some are not. In the first series of eight episodes we decided to focus on better-known legends from old Prague but if we continue, the 2nd series will focus on some of the lesser-known tales.”

What are some of the legends that have already been produced? Bára Zychová, photo: archive of Bára Zychová “We have finished production on six legends with two episodes remaining in Series 1. These eight legends form the first series and they include The Innocent Child from Charles Bridge, The Astronomical Clock and the Countess of Černín Palace. They can be viewed at our website legednystareprahy.cz. We wanted the films to be easily understood, for a broader audience, viewable on the internet. That’s why we keep some elements, such as the narration, relatively simple and easy to understand.”

So the aim is not only to reach Czech viewers...

“Correct. The ambition is to address a much wider audience and for the stories to be enjoyed not only by Czechs but also visitors to Prague, fans of the city and others. Since anyone can watch most of the legends for free at our website we have already gotten a great response from viewers from other countries including Poland, Italy, Russia and the UK. People have really liked it so far and we have already dubbed the first eight episodes into English and we are working on a Russian version as we speak.”

What are some of the reactions?

“Some of them really love it and many are interested to find out what further episodes will be about. They also ask about further information about the different legends. So they are really interested in where things will go from here.”

Let’s turn to the animation: it strikes me as very effective, what are some of the techniques that the series uses? 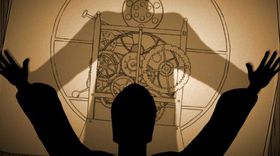 'The Astronomical Clock', photo: website of the project “The videos use a combination of several different animation and graphic techniques. We use what is called the silhouette technique as well as traditional animation and incorporate some real elements like parts of photographs and ‘textures’ of different materials such as books. That is how this unique series is being created and we are trying to follow up a bit in the legacy of animators like Karel Zeman.”

Making films is one of the most expensive fields: how is the project being funded?

“It has been paid for from private funds but we were also inspired by kickstarter and crowdfunding projects so we received donations and in return those who pledged will receive DVDs. There is, however, still more work to be done. In addition, we are talking to Barrandov Studios and are in negotiation with Czech TV to try and have the series broadcast, but there I cannot reveal details at this time.”

Of the episodes that were produced so far, which would you recommend? 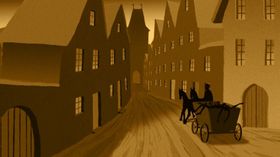 'The Innocents of the Jewish Cemetery, photo: website of the project “For me the most powerful was the one above love on the Castle steps. This one was very moving. It is about love and passion and is very beautiful but also sad.” 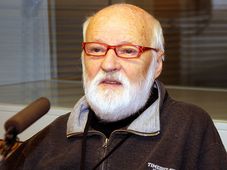 One of the world’s most acclaimed surrealist filmmakers Jan Švankmajer turned 85 on Wednesday. His signature surreal style, which relies…