On the first day of spring, a new space dedicated to the use of medicinal plants opened its doors to the public in Prague’s Žižkov district. The Haenke Botanical Lab named after a famous Czech botanist and explorer, was established by French pharmacist Julien Antih. His aim is to spark a broad debate about the use of medicinal plants in science, arts and urban design. Apart from herbs and plants, the space will offer a variety of workshops, public debates as well as concerts and art installations. Ruth Fraňková went to have a look: 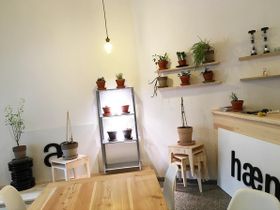 Haenke Botanical Lab, photo: archive of Haenke Botanical Lab “We have basic plants, such as melissa, mint, hyssop, which is very good for respiratory infections. This plant is a ginkgo, you can recognize it by the shape of its leaves. It is traditionally used for blood circulations. And here we have hops. Besides beer, it has been used for sleep problems in combination with other plants…”

Young French pharmacist and phytotherapist Julien Antih takes me around the newly opened studio, located on the corner of Bořivojova and Chvalova streets in Prague’s Žižkov district. The walls and windows of the Haenke Botanical Lab are lined with plants of various sizes and shapes. So far, many of them are just tiny seedlings, but as the weather gets warmer, the place is likely to get much greener in just a few weeks’ time.

“In France we have a tradition to use medicinal plants and even regular pharmacists are able to give you advice concerning medicinal plants. I studied pharmacy in France and then I went to London, where I studied ethno-botany, which is the relation between plants and people. My focus was medicinal ethnobotany and I was interviewing people to find out which plants what they are using in their everyday lives.”

The young French pharmacist relocated to Prague to make his dream come true and establish a space which would attract people interested in the use of medicinal plants as an alternative to synthetic drugs. So how exactly is it going to work and what will it offer to the wider public? These are some of the questions I put to Alexandra Střelcová, another person behind the Haenke Botanical Lab:

"The idea was conceived by Julien, who studied pharmacology and phytotherapy in University College of London at the School of Pharmacy. One day he was coming back from a conference in Cordoba, Spain and he thought it was a shame that little of the academic research and its results were actually being made available to the wider public.

"Thatʼs why he thought about creating a connection between the academia and the scientific research. A space where people could actually access this information through some interactive and physical means, such as the plants, because this is what it is all about."

So what exactly do you offer to people?

So this is intended for the wide public? 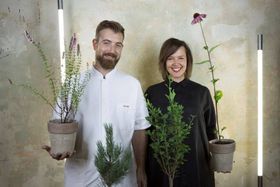 Photo: archive of Haenke Botanical Lab "Exactly. It is really for everyone interested in medicinal plants as such, who wants to learn more. There are many people, mainly from the creative industries, who have rediscovered medicinal plants and used them for their own purposes, be it natural cosmetics, or new product lines.

"To an extent, we are also a community based project. This is Žižkov, a neighborhood whose resident are either the elderly people who have been living here for their entire lives but at the same time it is a vibrant community of expats and young families and young professionals, and we are here for all of these people."

So who is part of your team? Is it just the two of you?

"Itʼs just the two of us. We are cooperating with Copenhagen-based architect Juráš Lasovský, who has been consulting the project since the very beginning. We are working with Czech designers, entrepreneurs and creatives. There are also people with scientific background who we think it is extremely important to create a structure that can connect the two but that will be scientifically relevant as well."

Why Haenke? Where does the name come from?

"Tadeáš Haenke was a Czech explorer and botanist who actually discovered and described scientifically quite a lot of medicinal plants, predominantly from Latin America. He is known as one of the scientists who described Latin America and its flora to European public.

"He was a member of the famous Malaspina expedition that went around the whole world. Apparently there is this story about him missing the main boat by about two or three hours. So he sailed in another boat, which sank, and he basically rejoined the expedition a couple of years later.

"So this is a story of someone who never gave up, essentially, about someone who pursued his goal and mission. He died in Bolivia in 1816. His name is not that known but he is definitely someone worth discovering. So we plan to open his works and enable access for the pubic to discover more about his life and legacy as well."

When will you actually launch your first workshops?

"We are about to start launching the first dates for April. The workshops will be conducted both in English and Czech. And they will take place quite regularly, every two weeks or so. We will also have open hours when people can come and have a look at the plants because essentially this is a growing collection of medicinal plants, some of which are not that common in the Czech Republic. The plan is also to connect arts and science, developing a long-term programme where we can perhaps host classical music concerts, exhibitions etc." 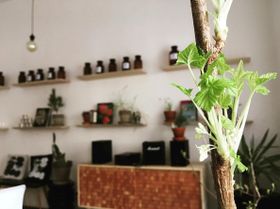 "We wanted to produce quality wooden furniture which would be affordable, which is something that is still missing on the local market. So we established this company. So far we have produced two collections. One is e15, a collection made of pine and the second, more artistic collection is called Folklore and it is made of different kinds of wood, such as pine, ash and others.”

As far as I know you are trying to produce things from local sources.

"The timber is from the Czech Republic. We would like to produce our furniture from solid wood. Our furniture must be hypoallergenic and with no harmful substances, so we don`t use any chemical glues, just natural oil."

How difficult was it to establish yourself on the market?

"It is pretty difficult, I have to say. We are trying to be seen on exhibitions such as Designblok, for example. But out furniture is mainly about quality. You can have it for twenty or thirty years and then pass it on to your children. So we are trying and we hope that it will be getting better.

And this space also serves as your showroom, in a way.

“Yes. You can come and see our products with your own eyes, touch it and even buy some small products. We also have an online shop, so you can come and pick out orders here. So this is how it works." 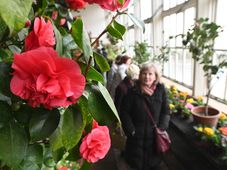