For several years now, a group of Czech enthusiasts have been involved in developing and supporting a skateboarding community in Burma. The country, now transforming from a former military dictatorship, has been going through dynamic changes, giving rise to various subcultures, including skateboarding. I spoke to Jiří Pasz, one of the founders of the Initiative Czech on Board with Myanmar about the local skateboarding scene, but I first asked him how he got the idea to launch this project: 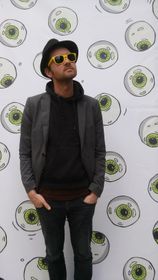 Jiří Pasz, photo: Archive of Jiří Pasz “In 2012 I was visiting Myanmar, or Burma, as it is known in Czech. I had a job making a photojournalistic project for Amnesty International. The organisation asked me for some fresh photos capturing the transformation and democratisation of the country that opened itself after 50 years of very rough dictatorship.

“Possibly my biggest surprise were the subcultures in Myanmar. I was able to meet punks, I was able to ride with skateboarders, I was meeting with graffiti makers and with the artist scene, with punk rock bands and metal fans.

“So after meeting these groups I was really stunned and I decided that I would like to support one of them, because they all were very young in terms of idealism and the energy. I especially liked that they all had some social dimension and they were all trying to help their community.

“Punks were trying to feed the homeless in the streets, the kids that had no food and no parents and the skateboarders were trying to include children with hearing disabilities. So that’s what captured my mind and I decided that I would love to help to develop this community in Myanmar.”

Why have you chosen the skateboarding community in particular? 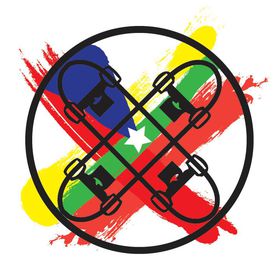 “When I was younger I was trying to skate a bit. I was not very good but I always had skateboarding in my mind. And there was an easy way of supporting them, because we here are somehow a developed country now. But we remember how it was when skateboarding was starting during the Communism, how people were desperate for a skateboarding equipment.

“So nowadays, we have the equipment and we can buy new one anytime. So me and my friend Marek, we just started to ask people around us if they could give us some older equipment that they don’t use anymore.

“Then we found some volunteers who were able to take it with them to Myanmar. So it was somehow logistically easy to implement this idea and it was effective at the same time. We don’t need any money, or almost no money, and we have been able to support them for a few years now.”

Skateboarding is not something one would associate with Burma. How would you describe the local skateboarding community?

“You are completely right. Possibly very few people associate skateboarding with Myanmar. As I said, it was very isolated for the past 50 years that’s why people are usually surprised to find these communities in Yangon. 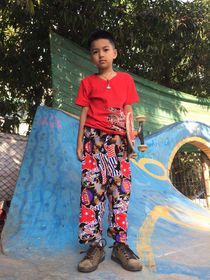 Photo: Pius Peru / Facebook of Czech on Board with Myanmar “The scene is just starting. It has been present there for a few years now, that is true. But there are very few places to skate on. When I was there in 2012, there had a few spots. One was under a bridge, one was near some swimming pool and there was another one in the park.

“I visited the one under the bridge, it was just a hidden place without sun, which is important in Myanmar if you want to skate or do any sports. But it was still locked in between two pretty big roads and it was quite unpleasant. There was nothing there, just a little straight spot to skate on.

“I think at the time, there were around 300 people who wanted to skate but they only had around twenty skates. The attractiveness was already there but people couldn’t buy skates or important them from countries like Thailand.

“There was a lot of effort and energy within the community self. It was not supported much from abroad. There were a few volunteers skating with the people, such as Australians working in Yangon. Everything was very local, but there was a lot of energy and that really capture our hearts.”

As you said, your main aim was to provide equipment to the local skateboarding community. Were you also involved in establishing some skate parks? 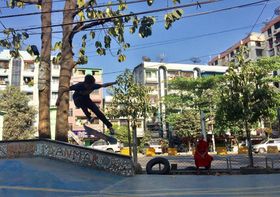 Photo: Facebook of Czech on Board with Myanmar “That was one of the biggest changes in the last few years. The military government in Myanmar moved the capital from Yangon to Naypyidaw, which is a very strange city, slightly reminiscent of North Korea. They were preparing for Asian Sport Games that took place in 2013 or 2014. They also built a skate park there, but the skate park was around 600 kilometres from the nearest skateboarder, so nobody was using it.

“So one of the biggest challenges was to build some kind of skate park in Yangon, which is the capital of skateboarding in Myanmar. Together with a global initiative, called Make Life Skate Life, we joined them in an effort to build a first real skate park for youth and kids in Rangoon.

“My friend Marek went there recently to build it. The finances were raised through crowdfunding and it is now successfully serving the community.”

How did the local people react to your activities? 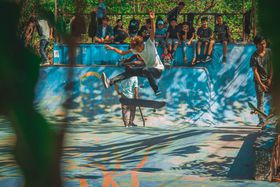 Photo: Facebook of Czech on Board with Myanmar “People in Myanmar are a very traditional community, they are Buddhists, and as I have already said, they were isolated for a long time. So they see these new trends as potentially strange or even threatening their old ways of life. So it takes a lot of effort in communication and explaining why it is good.

“And as we have news from our friends in Myanmar now they understand more and more now that it is better to have their kids skateboarding with others outside than just playing games on their mobile phones, because that’s a trend that is really global. So some parents are really glad now that there kids are outside sporting rather than just playing on their phone or computer.

How many skateboards have you managed to provide to the community since the start of the project?

“It is a bit confusing for us at the moment, we should keep the records in a better way, but I think it would be around 200 kilogrammes pf equipment that was kind of smuggled to Myanmar by volunteers. It’s a lot of boards, wheels, tracks, and even T-shirts and shoes. Some of the people who would like to start skateboarding, they don’t even have proper shoes. Some of the younger kids can’t afford to buy it. Maybe it sounds a little strange but they are very happy for any kind of older shoes just to start with.”

How has the situation in Burma changed over the years since you started going there? Have you noticed any change? 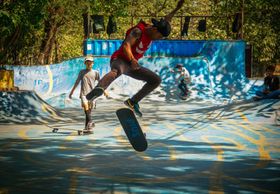 Photo: Facebook of Czech on Board with Myanmar The situation is changing very rapidly and dramatically, which in a way is quite similar to the transformation in Czechoslovakia which is also why I really like Burma, because there is something in common. Of course Burma is much more complicated and difficult. There are still some regional conflicts, which is something that hasn’t changed as much as people expected.

“But the capitalism and consumerism took over the country very fast, so nowadays the priority is, as in any part of the world, to have a good mobile phone, it is to buy better cars and televisions, people are nevertheless in the beginning of the transformation so I felt there was a lot of joy and happiness that the change is finally coming.

“People love to talk about politics, they love to participate and they love to try new things. For example one of the issues I was trying to find more about was censorship, because during the worst times, everything was censored.

“When I was speaking to one of the most famous punk-rock bands in Myanmar, they told me: the censorship is kind of very uncertain now- We still have to present our lyrics, but it is censored less and less, and we are always trying to push them a little bit further. But we still don’t know what can get us to prison and what is safe. So there was a lot of uncertainty as well. Because nobody really knew what the regime could do to them.”

Finally, what are your plans into the future? 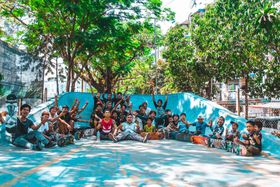 Photo: Facebook of Czech on Board with Myanmar “We definitely would like to contribute more to the scene. There are some plans to build more skate parks possibly near some schools so the children have some nice parks to play in and to sport in. We will definitely continue in transporting more equipment to Myanmar and we are communicating with our friends in Myanmar to find the most effective ways of helping them.

“For example one of the things they needed to solve was they needed lights. So we sent them money that we were able to fundraise to buy some lights, because if they skate during the evenings, there is not enough light in the streets. So we are trying to listen and cooperate. It’s a partnership. We are not trying to push anything.” 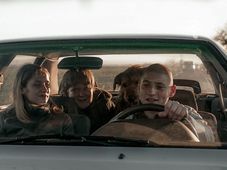 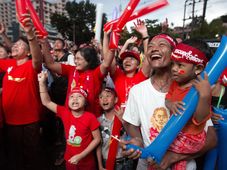 On Friday, it became clear that Burma’s National League for Democracy, headed by Nobel prize winner Aung San Suu Kyi, had secured a…