What happened to the photographer who captured the events of the 1968 Prague Spring?

This week the Czech Republic and Slovakia have been marking the 35th anniversary of the 1968 invasion by Soviet-led armies of the Warsaw Pact. The invasion crushed the liberal reforms known as the Prague Spring. Slovak photographer Ladislav Bielik received the 1969 World Press Photo award for his documentary series about the invasion. His photo of a screaming man baring his naked chest to a tank gun is included in the world press agency's 100 most prestigious pictures of the 20th century. But little is known about the man whose pictures of the Prague Spring were seen around the world. 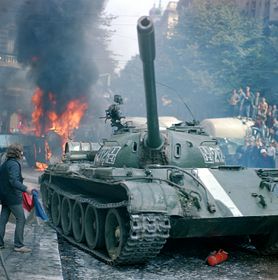 Prague, August 1968, photo: CTK I am standing in front of the Commenius University in Bratislava, right at the spot where the Russian tank was aiming at the screaming man. Today, here is one of the busiest crossroads in the capital. In a few moments I will meet Alica Bielikova, the wife of the photographer who took one of the 20th century's most famous pictures. Despite this fact, the name of Laco Bielik remains unknown to the world.

"There was a lot of smoke and shooting all around this crossroads. The barrels of the tanks started moving. Two people were killed right in front of our eyes. In this horrible atmosphere a running man suddenly stopped in front of one of the tanks. He was screaming. I couldn't see my husband at that point but my colleague was standing next to him when he took the picture. He simply must have been the only one who saw it and immediately reacted by taking a picture."

The picture of the screaming man facing the tank is really impressive. How did it happen that its ownership was misused?

"There were thousands of people escaping the country afterwards. Many of them took with them the newspaper where the photo was published. Maybe they made several copies of the picture. I really don't know how it spread all over the world. But I'm sure that Lacko did not give his picture to anyone to publish in the west. He always put his stamp on the back of his pictures, and there was none on this one." Prague, August 1968, photo: CTK The name of the German student who brought the picture to the DPA agency is known. Peter Stephan Lutz.

" I have never met him. I have just seen him in a documentary shot about the picture. There he admitted publicly that he appropriated the copyright himself. During all those years, he was given all the royalties. Despite this fact, the DPA agency does not want to acknowledge Laco as the photographer."

Why? There is evidence. You have the negative.

"Maybe that would harm the good name of the agency. They would have to make public apologies. Do you know how many times they published this photo? It could harm their image."

What would give you the greatest satisfaction? The copyright, the royalties?

" I wish I could tell Lacko at his grave that he has been recognised as the artist who was at the right place at the right time. "