Towards Freedom is the slogan of an exhibition which is on in Warsaw. It attracts mainly two groups of visitors: teenagers from schools and foreigners. The exhibition is a resume of Poland's history over the last two centuries, with stress on the Warsaw Uprising of 1944 and the aftermath of World War Two. Addressed primarily to a foreign audience, it was first shown at the European Parliament in Strasbourg. 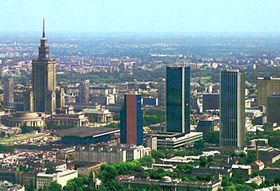 Warsaw "That romantic lady is the Motherland of Kosciuszko and Pulaski, Chopin and Curie-Sklodowska, of Paderewski and Pilsudski, John Paul II and Lech Walesa."

...an excerpt from the soundtrack of a film, which accompanies the exhibition Towards Freedom. Its curator Jan Buchwald told me that the idea was to show a line of events in Polish history, culminating in the birth of Solidarity 25 years ago and Poland's membership in the European Union:

"Polish events during the Second World War, the Warsaw Uprising and the occupation of Poland. This exhibition presents a line of Polish history which was a series of events on the road to freedom. It starts in the 18th century when Poland lost its independence. And it ends in the Solidarity movement to freedom."

During the recent Moscow ceremonies of the anniversary of the end of World War Two, Poland was not even mentioned by the Russian president among members of the allied coalition. Small wonder that much is being said these days about the need to promote Poland's view on history for the sake of historical truth. According to Jan Buchwald, the exhibition Towards Freedom is an eye-opener for foreign visitors:

"Our history is unknown abroad and our visit in Strasbourg in February this year, was for many visitors the first meeting with Polish history at all. We decided to show this exhibition in Warsaw to visitors from abroad and they tell us it's a revelation for them."

Zofia came to Warsaw from Israel and she was taken around the exhibition by her Polish friend:

The exhibition Towards Freedom is to be shown in London and Washington later this year.