The Rajko Ensemble: celebrating the influence of Romany tradition on classical music

The Gypsy fiddler is an enduring Romany stereotype, but we often forget there are also many Romany classical musicians and that in Central Europe the Romany tradition has had a huge influence on the history of classical music. Recently, as part of the Prague Autumn music festival, Czech audiences had the chance to hear the Rajko Ensemble from Hungary, with a concert in the Lucerna Ballroom that celebrated these links. All the orchestra's members are Roma; many are students or graduates from the Rajko School in Budapest, where talented Romany children learn to become professional musicians. The head of the ensemble's advisory board, Beatrix Berendy, spoke to Radio Prague about the Rajko Ensemble's past and present. 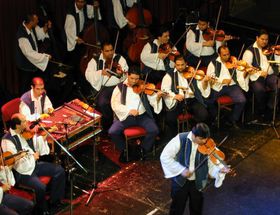 The Rajko Ensemble, photo: Jana Sustova "At the beginning, in 1952, there were Gypsies only in pubs. They were not performing in theatres. It was Gyula Farkas, the first Gypsy teacher, who founded the orchestra and found the Gypsy children from the deepest countryside - so from villages in Hungary and even outside the border, from Slovakia, Romania and Ukraine. He went and looked for the most talented children, and brought them to the orchestra. 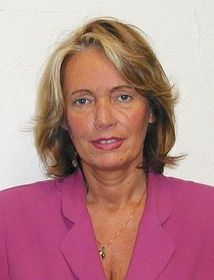 Beatrix Berendy, photo: Jana Sustova "At the beginning there were twenty of thirty musicians only, but he always wanted to work with a bigger orchestra, so sometimes it was even sixty or seventy children in the group, and they slowly grew up - so not only children but they became adults.

"Now we have thirty-two professional musicians, who are paid, who have their work based in the orchestra, and if we need more musicians, we can add the musicians from the school, or we can call those who used to study in the Rajko school and ensemble, and we ask them to play together with us. In this way we can get a hundred musicians together if we want.