The Hungarian agriculture sector a year after EU accession

The EU CAP or Common Agriculture Policy has caused many a Central European farmer headaches in the last year on issues ranging from production quotas to direct subsidies. In Hungary, where up to seven percent of the country's population of ten million are trying to earn a living from agriculture, the agri-food sector had high expectations from EU membership.

We asked Dr. Laszlo Vajda from the Ministry of Agriculture and Rural Development, what impact accession has made on the lives of Hungary's farmers:

"The first year brought several advantages such as the opening of the markets of the other member states for Hungarian products. Hungary is also a beneficiary of the different EU support measures now. But there were some negative aspects in the first year as well, mainly due to administrative difficulties. EU subsidies did not get to farmers when they were expecting them, which caused problems in their economic activities.

"There was also a very high demand in Hungary for cereal intervention in 2004 and we were again not fully prepared as far as warehouses were concerned and the administrative capacity needed to buy so many million tonnes of cereal for intervention. But we can say that farmers are now happy and are trying to adjust to the requirement of the single market and make best use of those subsidies that are available through the common agricultural policy."

Do you think that this first year served as a good basis for the further development of Hungarian agriculture? 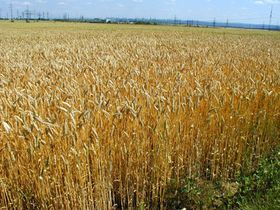 "I think so because the first year was a very challenging one. We experienced most of the differences of a single agriculture policy before accession and the different aspects of the common agriculture policy after accession. So, although there were some quite bitter experiences as well, they were quite positive because they made everybody in the government and at the farmers' level acquainted with this new requirements and therefore a quick adaptation can be expected in 2005 and 2006, which will bring success because Hungarian products are well known for their high quality and good prices and if we can improve our marketing and the promotion of our products, the 450 million people in the European Union would be happy and ready to buy Hungarian food products."