It's now less than one year before Slovakia, along with nine other candidate countries, joins the European Union. But before it does so, the EU says Slovakia has to curb corruption. It's said to be prevalent throughout the country. 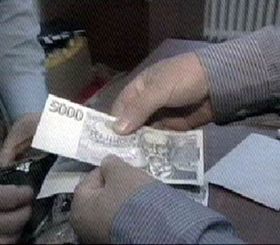 The police are perceived by many Slovaks as one of the most corrupt institutions. Apart from the police you can meet corruption and bribing in many other levels of society: health care institutions, judiciary, ministries or education institutions. This general view is also shared by the European Union. Slovakia along with other countries in central Europe was criticized for not doing enough to fight corruption. According to Emilia Sycakova - Beblava, president of Transparency International Slovakia, households perceive petite corruption, whereas entrepreneurs come into contact with grand corruption. She says:

"Slovakia is at the same level like other Visegrad countries, at the same level as the Czech republic, Poland and Hungary is getting worse regularly. From a maximum of 10 points Slovakia has received 3,7, well, that shows where we are standing."

In the period 2000 - 2002 Slovakia formed a lot of new bureaus that deal with corruption. The government named special prosecutors and is preparing a law on conflicts of interest. This way it strives to fulfil the required EU norms. President of Transparency International continues:

"There is the lack and the need for the reforms in this country. In that point of view that would somehow decrease the corruption potential and decrease incentives for both sides, for the demand and the supply side. There are two of them who are corrupt, not only the one on the side of public official. It's also us many times, I mean the citizens and the entrepreneurs, who are bribing the official."

A project called "Corruption sucks our blood" aims to decline tolerance towards corruption. Transparency International sees it as a waste of money. According to them such a project should not be an initiative of the government, since it is the state officials who are also viewed as corrupt. Ivan Gabal, manager of the project, talks about their findings so far:

"We learned that people are very frustrated and unhappy with the level of corruption. On the other side, corruption is understood and used as the most effective way of achieving public services."

The EU has been financially helping Slovakia to solve the corruption problem through PHARE funds. Many NGOs focus their work on this issue and state institutions are created to deal with corruption in the country. Emilia Sycakova-Beblava from Transparency International says:

"I think Slovakia is on a good track, but on the other side, the fight against corruption is a long-term fight."

The public stand towards corruption is clear, we need to lower the common behaviour of bribing.