Just under a month from now, the whole of Europe will be watching France, where a crucial referendum is being held on ratifying the European Union's first constitution. The Czech Republic is due to hold a referendum on the issue next year, but the country's conservative president, Vaclav Klaus, has already come out strongly against ratification. But is Mr Klaus's opposition in tune with public feeling? And will it have an impact on voting? Radio Prague's Ian Willoughby has the story. 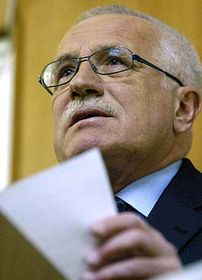 President Vaclav Klaus, photo: CTK Czech President Vaclav Klaus recently described the European Constitution as a revolutionary document which will change the lives of all Europeans, with the implication "for the worse". Mr Klaus's stance against the constitution has been making headlines recently, after a Spanish vice president of the European Parliament accused him of misleading and lying to voters, and said his Euro-skepticism could lead Czechs to isolation.

"Our president expresses a very Euro-skeptic view of the constitution, and I know of no other head of a European state or member of the European Union with similar views,"

Says Jan Kavan, a former Czech foreign minister, and member of the governing Social Democrats. The question is: are the Czech people likely to heed Mr Klaus's call to reject the European Constitution? Three quarters of Czech voters said Yes to joining the EU, and even supporters of Mr Klaus's party the Civic Democrats tend to be generally pro-European. Civic Democrat foreign affairs spokesman and MEP Jan Zahradil says that is true, but draws a distinction.

"That is true, but to be pro-European does not automatically mean being pro-Constitution. Pro-European in my opinion, means to be in favour of membership in the EU - which we were and still are - to be in favour of removal of trade barriers, movement of people, of labour, of goods and everything. 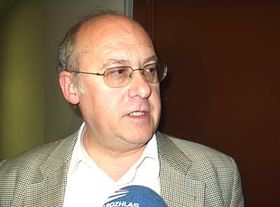 Jan Kavan "But it does not mean automatically that we should be in favour of building some European supra-state. So, yes, we do believe that we will be able to explain to the people that to be anti-Constitution does not mean being anti-European. These are two different things, different matters, different issues."

The Civic Democrats, and party founder President Klaus, will be trying to get that message across to voters when real campaigning starts. But former foreign minister Jan Kavan still believes if other countries vote for ratification, the Czechs will not want to set the whole project back.

"If the vote in France on May 29 is Yes, and in particular if the people of the United Kingdom vote Yes, I would be very, very surprised if the Czech Republic - voting almost towards the end of all countries - would vote No. I think if the major countries say Yes then we will say Yes, and I very much hope this will be the case."