Over 6,000 young Jewish young people from around the world and 600 Poles have taken part in the 2.5 kilometre trek from Auschwitz to Birkenau, the route of the death march taken by more than one million Jews during the Holocaust. This report from Bogdan Zaryn begins with Sophie, a Jewish teenager from Canada who's come to Poland for the very first time...

'I want to see what happened to my family, my great grandparents, all the Jewish people, because I'm of age now, I wouldn't have understood fully what was going on'

Do you know anything about Poland?

'I read books about Polish people hiding Jews and saving their lives. I think it's amazing, because they risked their lives to save Jews' lives'

We're sitting alongside a survivor of Auschwitz Birkenau.

'Here are the barracks. Here is my bunk. Actually it was for four people, but we used to sleep eight of us.'

[Sophie asks:] Was there ever a time that you lost your faith in God and humanity?

'Absolutely. It's hard to imagine that God could allow those things to happen. And when you go near the barracks and you put your face to the wood, you could still smell the burnt flesh and burnt hair. Young people should know about it, like they would know about other wars. Because it was one hideous time and destroyed so many people, and the people who are left alive are still suffering, even if it's over fifty years.' 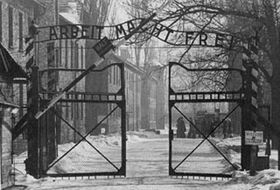 Auschwitz Birkenau Polish youths have been taking part in the March of the Living for the past five years. Polish historian Piotr Karol believes this is an important step forward in closing a yawning gap between Poles and Jews.

'Before, the March of the Living was purely an Israeli or Jewis, Israelis and Jews in general, to meet and I think that such a form of commemorating this event is adequate.'

This year the March of the Living, which has been held annually since 1988, coincides with the sixtieth anniversary of the uprising in Warsaw's Jewish ghetto.