Slovenia has been a NATO member for a year now. During this time, the country has taken on some serious tasks with peace missions to a number of tense areas including Afghanistan and Kosovo. Its role was acknowledged by the NATO parliamentary assembly meeting in Ljubljana this week.

Ljubljana Slovenia was a bit of a latecomer to the NATO alliance, missing the alliance's first wave of expansion into Eastern Europe in 1999, when it took on the Czech Republic, Hungary and Poland. But the government was keen on joining NATO, and after the public backed membership in a referendum, Slovenia successfully joined in 2004. The following busy year was topped off this week by a NATO parliamentary assembly in the Slovenian capital, Ljubljana.

"The topics were bilateral cooperation and NATO expansion. Slovenia is interested in NATO expansion into the West Balkans. We think that this expansion could contribute to a greater stability and a more stable peace in our region. Especially in West Balkans, NATO has had a key role in ensuring stability. We are aware that especially in Kosovo, NATO will have to control stability for some time, including Slovenia's cooperation that is becoming more prominent in this region. With all other factors, lasting solutions must be found to stabilize the situation in Kosovo."

Also in attendance was NATO's secretary general, Jaap de Hoop Scheffer, who also stressed the pressing problem of Kosovo and its importance to NATO:

"Kosovo is entering, I think, a very crucial period with the standard evaluation - later perhaps possible status talks. NATO has an important responsibility there, as 18.000 of our troops are in KFOR securing stability in Kosovo, which is so essential for any political process taking place there."

The secretary general also thanked Slovenia for its contributions to trouble spots like Kosovo and Afghanistan, citing it as proof that small countries also have a role to play in the alliance. 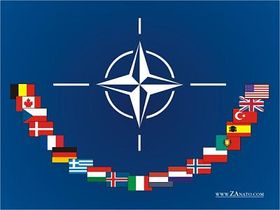 He also encouraged members to remain committed to the alliance, whose purpose has increasingly been questioned since the collapse of the Soviet Union. The secretary general stressed that NATO's workload will actually increase in the future:

"I will encourage all allies, including Slovenia, to do as much as they can to participate in NATO's operations and ambitions, because I think the demands on NATO will not diminish. They will grow. This does not mean NATO is the world policeman but it does mean that calls on NATO to project stability will grow stronger instead of weaker."

It remains to be seen how Slovenia and the countries of the former Yugoslavia will handle these future challenges.