Is Poland doing enough to bring WW2 criminals to justice?

The Simon Wiesenthal Centre has criticised countries in Central Europe including Poland, Austria, Hungary and Slovakia for not doing enough to bring World War II war criminals to justice. Their 40-page report gives a C for minimal success to Poland and a D grade for insufficient efforts to Austria, Hungary and Slovakia. But Polish Jewish organisations defend Poland saying it has already prosecuted the vast majority of its war criminals.

Countries where Holocaust crimes were committed need to step us their efforts to try suspected war criminals, especially eastern European states and Austria - the Simon Wiesenthal Center has announced in its latest status report on the investigation and prosecution of Nazi war criminals, The Jewish Rights Organisation gave high marks to the United States and recognised achievements in Germany. The 40-page report gives "C" to Poland for "minimal success" and a "D" for "insufficient or unsuccessful efforts" to Austria, Hungary and Slovakia. Dr. Efraim Zuroff, of the Wiesenthal Centre, the author of the report explains:

"Poland unfortunately, got a lower grade than they did last year. And the reason for that is that the grade is primarily a function of the successful results in judicial terms that a country is able to achieve. Poland unfortunately, did not secure any convictions this past year, nor did they file any indictments"

Doctor Zuroff describes as unconvincing the completion of the investigation into a much-publicized series of massacres of Jews by Polish villagers, notably, in the village of Jedwabne in 1941.

"Well, you see in the Jedwabne case there were no indictments. In other words, the investigation was carried out and the conclusion was that there are no people alive who can be brought to trial who were actively involved in those crimes. So, on the one hand, we certainly appreciate the work of the Institute of National Memory, headed by Prof. Kieres, but the grades reflect results. And in that respect, as important as the Jedwabne investigation was, it did not yield any practical results." 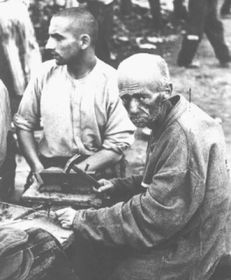 Concentration camp in Dachau Piotr Kadlczik, president of Warsaw's Jewish Community in Warsaw holds the opinion that, in order to try those octogenarians, a proper definition of war criminal should be set first.

"I think that we shall determine, we shall set the proper definition of a war criminal. Because whether we are talking about someone that was a 'capo', or an informer, in a concentration camp or someone like a peasant who burnt Jews in a barn in Jedwabne. And under such circumstances we can talk about two different issues. Because, as to my knowledge, there were at least attempts and even recently about a year ago, to try someone that was "capo" if I'm not mistaken, in Be??ec. However, if we're talking about the more broad definition of a war criminal, I do know that there was an investigation of Jedwabne that was completed. That there is an investigation regarding a pogrom in Kielce."

Stanislaw Krajewski, a Polish Jewish philosopher, thinks that the criticism and lower grade that Poland received, are undeserved.

Stanislaw Krajewski argues that other countries can now report more war criminals put on trial, simply because they took longer to start looking for them. So, according to him, the low grade Poland received was in fact granted on a technicality.