Ethnic Hungarians living outside Hungary make up the second largest minority in Europe after the Russians: The Hungarian government's so called Benefit law, that favours ethnic Hungarians living outside the national borders has been a source of tension between Hungary and Slovakia in recent years. But now the Hungarian and Slovak foreign ministers have issued a joint statement saying that safeguards can be implemented for the national minorities living in their two countries. It follows a similar agreement between Hungary and Romania last week. The Hungarian government is hailing the statement as a breakthrough, as the Hungarian Foreign Minister, Laszlo Kovacs, explains. 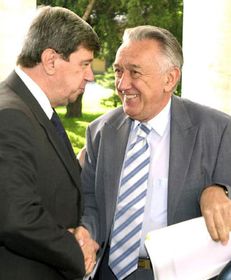 Slovak Foreign Minister Eduard Kukan and Hungarian ForeignMinister Laszlo Kovacs (right), photo: CTK "The Slovak Prime Minster earlier went too far when he very categorically stated that he would never be prepared to have any negotiations on the application of the Hungarian Preference law on Slovak soil, and so it was for him and his foreign minister practically impossible to come back from this point. Therefore we agreed that, respecting the Slovak position, we would not discuss, and we would not negotiate on the Preference law itself. We would not even negotiate on the application of the Preference law but we would negotiate concrete preferences and benefits that those Slovak citizens that are Hungarian or Slovak by origin are entitled to have that are connected with the Hungarian language or Hungarian culture."

What has changed compared to the Status Law, which was adopted by the previous parliament under the previous government?

"The basic difference is that the former law was of discriminatory nature, because it differed between Slovak or Romanian citizens and citizens of neighbouring countries according to their ethnic origin. On the basis of the original Status law for example, in a Hungarian school in Slovakia or Romania only students who were of Hungarian origin were entitled to these preferences were. Slovaks or Romanians girls and boys attending the very same school were not invited to receive help, as there were of Romanian or Slovak origin. That was the basic problem that the European Union had with the former law. Therefore when we amended the Status law - and we even changed its name, as it's now called the Preference law - we deleted these discriminatory paragraphs. And now it is a non discriminatory, EU conform piece of legislation."