Hungarian police reach out to the Roma community

Hungary's efforts to improve the lot of its large Roma, or gypsy, minority have been given a boost by an initiative near the capital, Budapest. Young police officers in Pest County are being taught a Romany dialect, Lovari, in a project designed to foster better relations between police and the Roma. Officers are also learning about ethnic issues and conflict management. 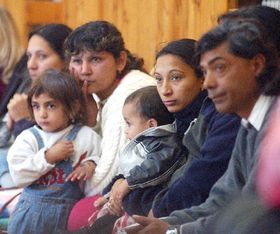 Photo: CTK Although law in Hungary prohibits racism and segregation, the Roma, nearly 10 per cent of the population has been subject to discrimination over the past decades. Some schools educating Roma children outside normal classes receive huge media coverage, but conflicts between the Roma and police cause even bigger sensation.

"This program is designed for those co-workers, employees, active police officers, of the Pest County police force who on a daily basis interact with the Roma community, to make them better understand Roma culture and the mentality of the Roma people. And to deflect if possible any future conflict between the Roma and police officers."

Of course, this project may give you the idea that the Roma has a lot to do with police. Do we know the exact percentage of crime committed by the Roma in Hungary?

"The law prohibits police from maintaining records of criminality from within any specific minority group. We do not maintain statistical figures on the crime rate within any ethnic minority group whether it be Roma or Slovak or Romanian."

Will Roma also be teaching the police?

"I have no way of knowing. Possible the language instructors will be Romany people."

But what do police expect from teaching the staff a Romani dialect, Lovari - I ask Major Tamas Kis.

"I'm in no position to form corporate opinion on this but I personally believe it will be a small but important step towards a better understanding between the Roma and the police."

Pest county's experimental course launched this September to teach a Romani dialect, Lovari and conflict management to officers will conclude on the 31st of May next year, the same month when Hungary will become fully integrated in the European Union. But Europe cannot be truly unified without integrating the Roma - Prime Minister Peter Medgyessy told an international conference in Budapest last summer. He added that the forthcoming 10 years should be decisive in achieving that goal. Is there hope that a people without a country of his or her own will one day cease to become a source of ethnic tension?