On May 1st 2004, Slovakia, Hungary, Poland, Slovenia, the Czech Republic and five other European countries joined the European Union. But after years of preparation, Central Europeans met EU membership with 'cautious' optimism, unsure of how EU accession would affect their every-day lives. One main fear that most Central Europeans had a year ago was that prices would go up while salaries would remain the same. 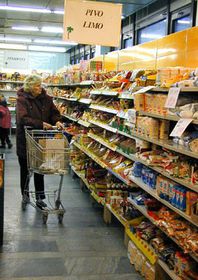 Economists in Slovakia forecast lower prices for electronic goods but higher prices in necessities like foodstuffs. Radio Slovakia International found out whether they were proved right:

Exactly one year ago sugar, rice and bananas disappeared from supermarket shelves in the last days before Slovakia joined the European Union. Analysts predicted a 5-10 percent increase in their price because - as of May 1st 2004 - these products would be affected by the Union's common market policy, protecting EU farmers. "We're selling much more rice than normal" confirmed the spokesperson of one of the leading Slovak hypermarkets towards the end of April 2004.

When we spoke to people at the time, the prospect of prices rising sky-high was one of their biggest fears.

"... I am a little bit skeptical, especially of the prices of food, flats and everything...."
"... the ordinary citizens will be disadvantaged by the higher prices..."
"... I think it will take a long time when Slovakia reaches the western standard of living..."

Now, one year later, we can confront the myths about the Union with the facts. Marek Gabris, macroeconomic analyst for the CSOB bank comments on the development of prices:

"One year after we can say that the catastrophic scenario didn't happen during 2004. Consumer prices rose by 5, 9 percent in 2004 and 7,5 on average during the whole year 2004. We can say that the inflation development in 2004 was very favourable. People also expected a rise in food stuff prices, but this expectation was not met."

As Gabris states there are several explanations why the increase in prices didn't occur. Marek Gabris:

"One is stronger crown or better exchange rate development and also higher competition in the retail sector, which we could name as the war of hypermarkets."

...which for consumers is certainly good news. However, just as some hypermarkets are only just settling down in Slovakia, some of the renowned ones are announcing their withdrawal from the market, for exactly this same reason.

As for 2004 the biggest influence on inflation was, in more than 80 percent of cases caused by administrative measures taken.

"Especially regulated prices increase and changes in value added tax and in May also the increase of consumption taxes especially tobacco taxes."

... certainly for many a very noticeable change. Prices of tobacco products have risen by more than 6 percent as of May 1. 2004. This is not the result of the country's entry into the EU, but the implementation of the new flat tax rate on the products. Looking into the future, food products are not among those most threatened with price increases, says Marek Gabris, macroeconomic analyst for the CSOB bank:

"Most endangered are prices of oil, which could also have an impact on the Central European economics."

Just as rumours about sudden price rises spread around Slovakia last year, this year Slovaks talk about the country's entry into the Eurozone, fearing that this too could put pressure on prices. However analysts say there is nothing to be afraid of. Marek Gabris: "I don't think that there could be any big impact that could negatively influence prices in Slovakia after the adoption of the Euro by the Slovak republic. "

Although most prices didn't go up, rice and sugar are among the few products that are now more expensive. Rice costs approximately 50% and sugar 10% more than last year.

Experts estimate that prices in Slovakia for 2005 should increase by approximately 3 percent, the lowest inflation rate in the country's history.