Democracies will always be vulnerable to terrorism, says Hungarian expert 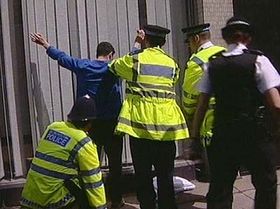 Photo: CTK The latest attempts by bombers to bring fear to the heart of the British capital London have once again focused minds around Europe on the issue of terrorism. One of Hungary's most respected experts on the subject is Sebestyen Gorka, director of Budapest's Institute for Transitional Democracy and International Security; Hungarian Radio's Gyorgi Jakobi asked Mr Gorka if he thinks the latest terror attacks have really raised levels of fear or unease around the continent.

"The core element of terrorism is the inculcation of fear, the spreading of a message of fear. It depends on the individual themselves, do they live in a country that could be the focus of the next attack. If so they probably are affected psychologically by this attack. I think those who live in countries that do not seem themselves as targets for Al Qaeda or Osama bin Laden react quite differently."

Though the London bombings two weeks ago were appalling, many felt they were not unexpected. Do Europeans now feel helpless in the face of terror, and does that lead to a kind of indifference?

"Well I think that's the case. One is helpless to being hit by lightning in a thunderstorm, therefore there's no point spending your whole life worrying that you're going to be hit by lightning.

"I think indifference perhaps is the wrong word. We have to understand, and this is a truism, that those people who live in democracies - and we say that democracies are the best way of running a country - these individuals will always be vulnerable to terrorism.

"One of the prices of living in a democracy is that there are certain freedoms and liberties that terrorists can exploit. Also we're not prepared and we cannot even afford to have a policeman next to every citizen in our democracies, that's not the answer."

What does Mr Gorka think about the supposed connection that is drawn by some between what we've seen happening in London recently and the situation in Iraq?

"I think that's a fallacious way of looking at the issue. You have to understand that bin Laden from '95 onwards has declared war against all of western civilisation.

"He doesn't really care if we leave Iraq or not, that's a current temporary focus of his rhetoric. He wishes to destroy all western civilisation, because he sees it as anathema to his interpretation of Islam. Whether we withdraw from Iraq or not is beside the point, because his end state, the thing that he wishes to achieve, is the destruction of western civilisation."

New York, Madrid and London are the western capitals which have been hit in the terror attacks of the last few years; Sebestyen Gorka says he is not inclined to predict 'where next', but says there are some countries which may have reason to be especially concerned.

"I would expect, if I had to predict something, that now efforts will be made to execute an attack against the government of Italy, or the citizens of Italy. And perhaps potentially against Poland, given that Poland is very Iraq and even has its own military sector."