Debate rages on over Lety concentration camp for Romanies

A new exhibition opened in the Czech Parliament building this week to commemorate the Lety concentration camp in South Bohemia. Some 1,300 Roma and Sinti were interned at Lety, which was run by Czech guards, not Germans. But sixty years on, a fierce debate is still raging over Lety.

Cenek Ruzicka, chairman of the Committee for the Redress of the Romani Holocaust, speaking at the opening of the exhibition. Entitled "Lety - History of an Unmentioned Genocide", the exhibition features photographs of the camp and those who were subjected to terrible conditions inside it. Markus Pape is one of the organisers.

Lety was set up as a "disciplinary labour camp" for "workshy" and "unadaptable" citizens - both Roma and non-Roma - by the post-Munich Czechoslovak government in early 1939. In August 1942 however, under a decree by the Nazi protectorate, the camp began to be used exclusively as a concentration camp for Romanies. A total of 326 Roma, 241 of whom were children, died at Lety of cruelty, ill-treatment and disease. In 1943 the surviving inmates were rounded up, transported to Auschwitz and murdered. Czech Prime Minister Jiri Paroubek told me Lety remained a shameful episode in his country's history. 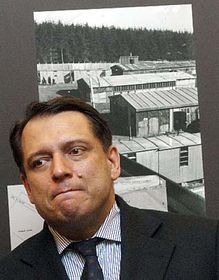 Prime Minister Jiri Paroubek at the exhibition, photo: CTK "I think that Lety is a great symbol of racism, and speaking openly it was a concentration camp [staffed by] Czech policemen, not German officers or German soldiers or SS soldiers but Czech policemen, for Czech gypsy citizens. Of course it is a very complicated thing after 65 years to speak about it, but I think the Czech nation has a certain debt to the past."

How to repay that historical debt remains a source of great debate in this country. In the 1970s the Communist authorities built a pig farm partially occupying the site of the camp - for years Roma groups and many politicians have fought to have it removed. Recently the European Parliament entered the fray, which re-ignited the Lety debate. Prime Minister Paroubek is among those who would like to see the pig farm removed, but he admitted to me he had little confidence he would succeed where so many of his predecessors had failed. Sixty years after the end of the war, the Czech Republic is still coming to terms with a dark and painful episode in its wartime past.