German Chancellor Gerhard Schroeder has rejected plans for a Berlin-based memorial to the ethnic Germans expelled from central and eastern European countries after world war two. He fears Germany's own wartime excesses could be glossed over. A petition for the centre has been launched by the private "Federation for Expellees" to create a memorial for the estimated 12 and a half million ethnic Germans who were expelled from their homes in present-day Poland, the Czech Republic and other Eastern countries. Why shouldn't it be built in Berlin? Dr Oliver Rathkolb is Professor of History at Vienna University. 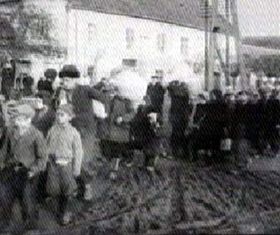 Expulsion of the Sudeten Germans "Berlin right now, as you know, is starting to build this large holocaust memorial. And therefore I think the key issue is whether this centre could become some kind of compensation. Here on the one hand you have an unbelievably strong monument focusing on the fact of Germans (or German speaking) being collaborators or perpetrators during World War 2 with regard to the holocaust and then at the same time you have another centre which will certainly place a special emphasis on Germans being victims."

So are you saying that if this is placed in Berlin it waters down, it weakens, the importance of what happened to European Jewry and the crimes of Nazi Germany?

"Absolutely, I don't think Berlin is a good sight for this centre and if you are really interested in dealing with not just the expulsion of German, but dealing with forced migration in the 19th - 20th century and the centuries before in Europe then I think you should find another place."

But there seems little political will to do this - I mean if we're to take the Czech Republic as an example and its reluctance to even talk about the expulsion of the Sudetendeutsch from the Czech lands - there's not much political will in these countries to do something like this at the moment is there?

"Absolutely right. I think they are similar to the Austrians when they try to drag their feet dealing with National Socialism. I think there's a similarity that societies and particularly political elites have a tendency to more or less suppress negative chapters of recent history in the political debates and I think the Czech Republic is a clear cut case because if you analyse the debates in the Czech Republic and Poland it's quite different. Poles are much more open to this issue which also might have something to do with the fact that in Poland you have a more or less double situation - an ambivalent situation - Poles being perpetrators in the expulsion of Germans but at the same time large numbers of Poles being victims of expulsion because of Soviet and other interventions and German policies at the time. Obviously this makes it more easy for them to play such an open minded discussion on this issue."